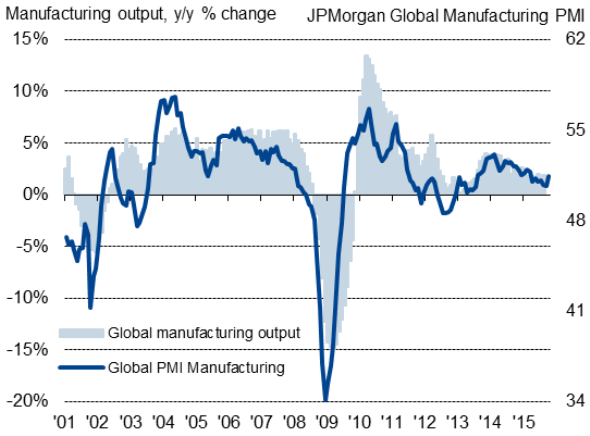 The JPMorgan Global Manufacturing PMI", compiled by Markit, rose from 50.7 in September to 51.4 in October, recording the largest monthly rise for almost two years to reach its highest level since March.

The latest reading is a welcome improvement after the PMI signalled the weakest quarter of manufacturing expansion for just over two years in the three months to September. However, growth remains weak by historical standards: the survey is merely signalling an annual rate of growth of global manufacturing output of just less than 2%.

Global trade flows remained weak, albeit picking up to the show the strongest growth seen so far this year.

Employment increased, having dipped in September, showing the largest monthly gain since June. However, the hiring trend remained weak amid widespread uncertainty about the economic outlook and worries about overcapacity in many industries.

Firms benefitted, however, from a second consecutive monthly fall in average input costs, which fell at the fastest rate seen so far this year reflecting low global commodity prices. Output prices were meanwhile cut, dropping to the greatest extent since May 2013, as firms offered discounts to boost sales.

The developed world once again led the manufacturing upturn, as emerging market manufacturing remained in recession for a seventh successive month. Of the top 15 countries monitored, 11 were developed economies. 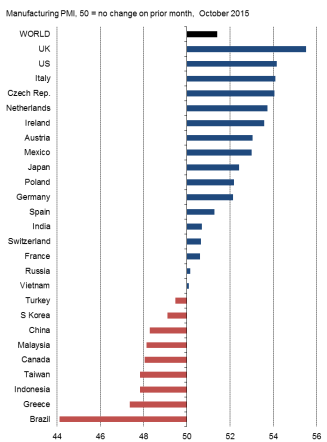 The UK regained the top spot in the rankings, a position it last held in April 2014, followed by the US.

A sharp rise in the UK PMI to a 16-month high indicated a tentative revival of the country's recent industrial slump.

Stronger export growth and robust domestic demand helped push the US into second place in the rankings, with the PMI reaching a six-month high.

The improved US economy also had a knock-on effect in Mexico, lifting growth to a five-month high via increased exports. Canada's exports fell for the first time in six months, however, causing the PMI to signal the steepest downturn in the survey's five-year history. 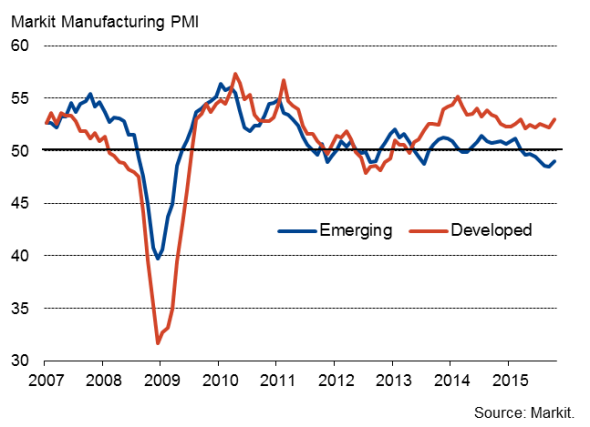 Eurozone manufacturing growth edged higher but remained lacklustre, with a slowdown seen in Germany, and France remaining near stagnation. But the single-currency area was not without its bright spots, with Italy moving into third place in the rankings and the Netherlands, Ireland and Austria all recording robust growth.

Asia's ongoing malaise was highlighted by only three countries from the region featuring in the list of 17 countries that enjoyed expansions in October, namely Japan, India and Vietnam, and the latter two only recorded marginal expansions. India's growth fell to a 22-month low, and conditions have stalled in Vietnam over the past two months. China, Taiwan, South Korea, Indonesia and Malaysia all remained in decline.

Manufacturing across all of Asia consequently hovered in recession for an eighth consecutive month. However, the downturn eased slightly during the month, registering the smallest contraction since May, caused most notably by PMIs hitting 12- and four-month highs respectively in Japan and China. Both countries appear to have enjoyed export growth. 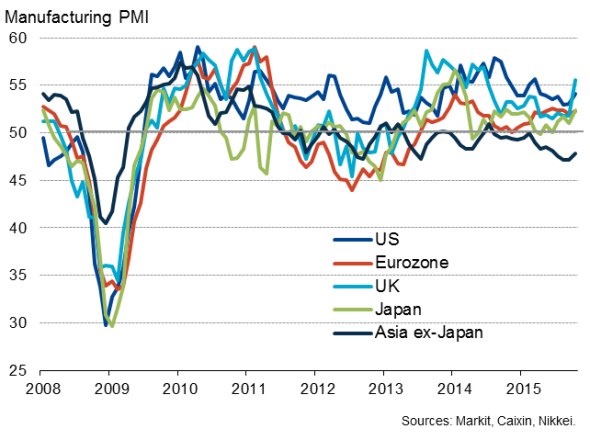 Brazil replaced Greece at the bottom of the table, as its PMI showed the steepest monthly deterioration in business conditions since the height of the global financial crisis in March 2009.

Russia, another emerging market that has been plagued by recession, meanwhile reported a marginal expansion of activity in October to suggest the economy is stabilising despite a further sharp fall in exports, hinting at a revival in domestic demand. 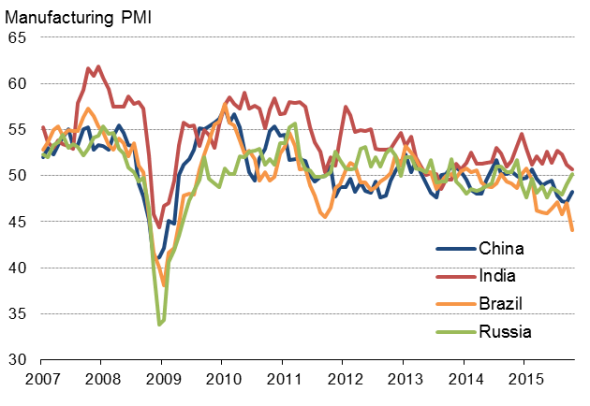