UK construction activity fell for the first time in over a year in September, according to PMI survey data, reflecting declines in civil engineering and commercial building. Expectations about future growth also deteriorated to the lowest for over a year.

The IHS Markit/CIPS Construction PMI fell from 51.1 in August to 48.1 in September, its lowest since July 2016 and dropping below the neutral 50.0 level for the first time since August 2016. The latest survey therefore indicates that the construction sector has slipped into decline for the first time since the brief downturn in the summer of last year, when building activity was disrupted by the surprise EU referendum result. 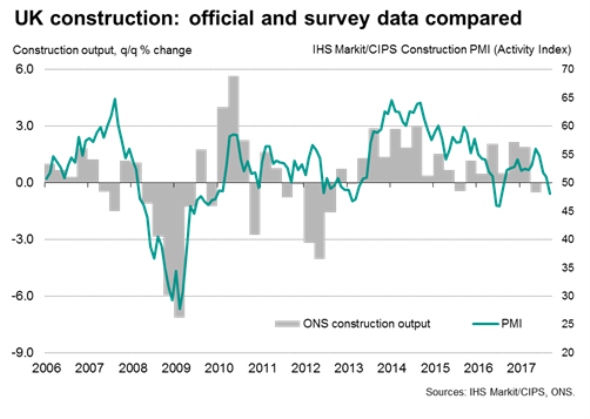 The survey data act as a supplementary indicator to Office for National Statistics (ONS) numbers, which tend to be produced with a delay and suffer from substantial revision after initial publication, to the extent that recent years' data need to be treated with caution. For example, a previous estimate of a 1.3% drop in construction output during the second quarter has since been revised to show a more modest 0.5% decline, while growth in the prior two quarters has almost doubled compared to previous estimates. A decline in the third quarter of last year has meanwhile been revised away to show a reasonably solid 0.5% gain.

The average (absolute) revision to the quarterly official data over the past two years has been 0.6%, with further revisions clearly possible.

The September downturn looks likely to run into coming months. Inflows of new work fell for the third successive month, contributing to the largest drop in buying activity by construction firms for 14 months as builders scaled back their input requirements in line with lower workloads. 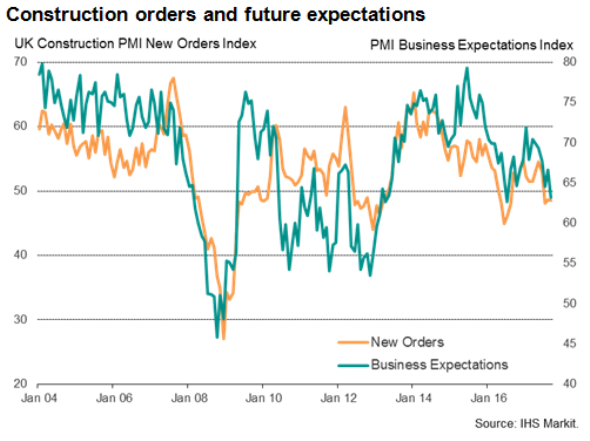 Optimism about activity levels over the coming year meanwhile slipped to the lowest since July of last year, when uncertainty fuelled by the Brexit vote blurred the outlook.

Adding to the picture of a downbeat operating environment, the declines in activity and orders for new work were accompanied by the sharpest rise in input costs for seven months, suggesting margins will be coming under increasing pressure.

Digging down into the construction data reveals further worrying trends. The biggest loss of momentum was recorded for civil engineering, where activity suffered the largest monthly fall since April 2013. However commercial building fell for a third successive month, rounding off the worst calendar quarter since 2009. 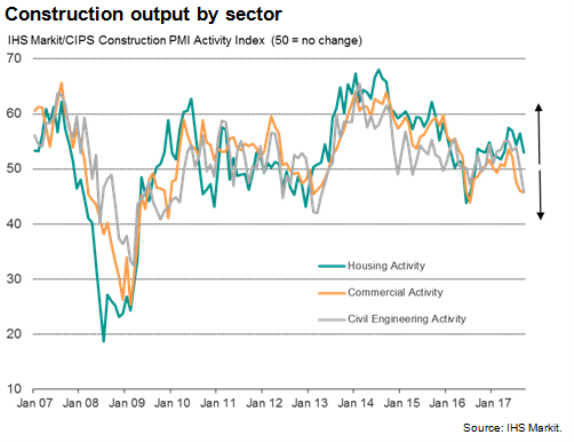 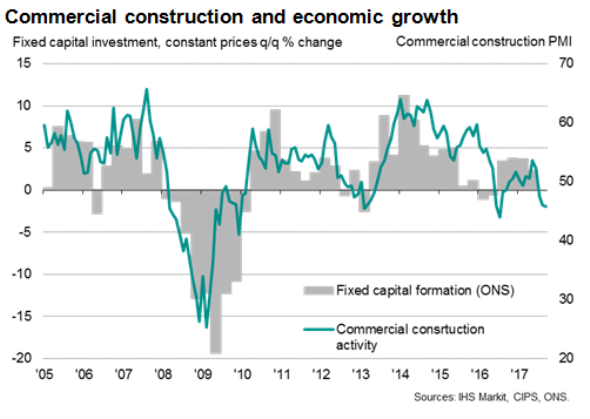 Flash #PMIs for January will be released next week while central bank meetings in the US and Canada unfold. Preview… https://t.co/WVzf9x2bmI