An uptick in business conditions in September means Asia's manufacturing economy reported its first expansion for one-and-a-half years in the third quarter. Although only marginal, the improvement suggests that regional manufacturing conditions are steadying, albeit with significant variations in performance across the continent.

The Asia Manufacturing PMI, an aggregate based on national Nikkei and Caixin PMIs compiled by Markit, inched up to 50.2 in September, from 50.0 in August. This brought the quarterly average to 50.1 in Q3, from 49.1 in Q2. 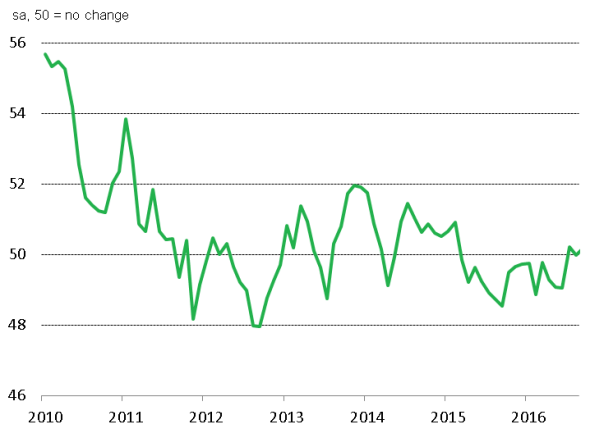 The surveys have shown signs of stronger demand. New orders placed at Asia manufacturers rose for the second time in three months in September. However, the easing of supply chain disruptions caused by the Kumamoto earthquakes earlier in the year is also a factor behind the recent improvement. 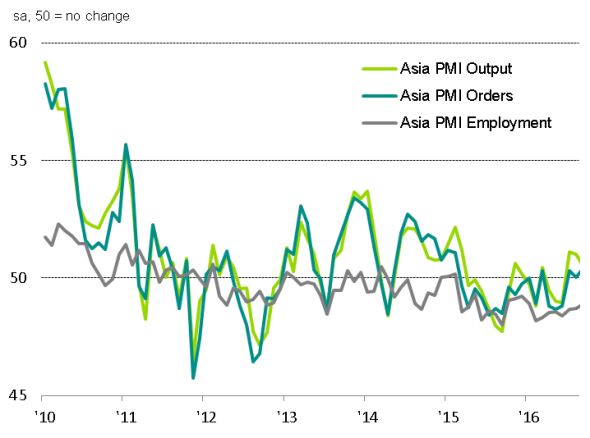 There were also signs of improving international demand, as exports orders increased in September for the first time since November 2015.

With China making up a large proportion of Asian manufacturing, its recent struggles have placed a major drag on the region. However, with the Caixin PMI edging up to 50.1 in September, ending the best quarter for two years, there are signs of the drag beginning to ease.

Resurgent growth was meanwhile seen in Japan, where the Nikkei PMI rose to the highest level since January, showing marginal growth after six months of decline (a downturn which peaked in May, in the immediate aftermath of April's quakes).

India continued to reign as the fastest growing major Asian manufacturing economy, the PMI dipping slightly in September but nevertheless rounding off the best quarter since the end of 2014.

Countries ranked by Manufacturing PMI in September (sa, 50 = no change) 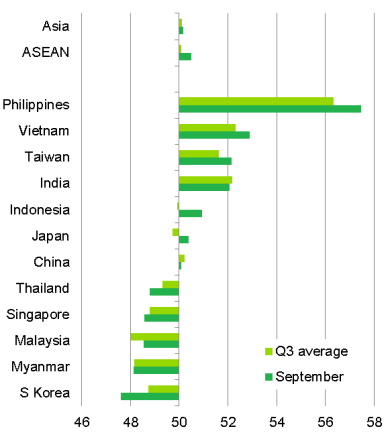 However, it was the Philippines that again led the region, and by a wide margin, thanks to strong demand for its commodity-related products. The Philippines was also the best performer over the third quarter as a whole.

Robust growth in the Philippines, Vietnam and Taiwan helped push the recently-launched Nikkei ASEAN PMI up to 50.5 in September, its second-highest reading over the past two years.

At the other end of the scale, South Korea reported the sharpest deterioration in September, with the Nikkei PMI sinking to a 14-month low as production was hit by labour strikes and a significant decrease in foreign demand.

Manufacturing firms tend to increase manpower to meet higher demand and raise output. But hiring prospects remained tepid. Factories across the region continued to shed manufacturing workers, with payroll counts down for a nineteenth consecutive month. Layoffs in Chinese factories continued to dominate the region, as many of China's firms again sought to trim excess capacity.

While the pan-Asian surveys therefore provide tentative indications of an improvement in demand, it is not yet strong enough to cause supply constraints. A modest lengthening in average suppliers' delivery times reflected a manageable supply chain. Meanwhile, the lack of capacity pressures and still-low commodity prices capped inflation.

Overall, the survey results showed that manufacturing conditions in Asia are improving after an extended period of mild contraction, pulled up by improved new orders. But ongoing job losses signal that manufacturers are not overly optimistic about growth prospects. A still-dim outlook suggests that regional governments may seek stimulus measures to boost economic growth unless the improvement in manufacturing activity gains momentum in coming months. 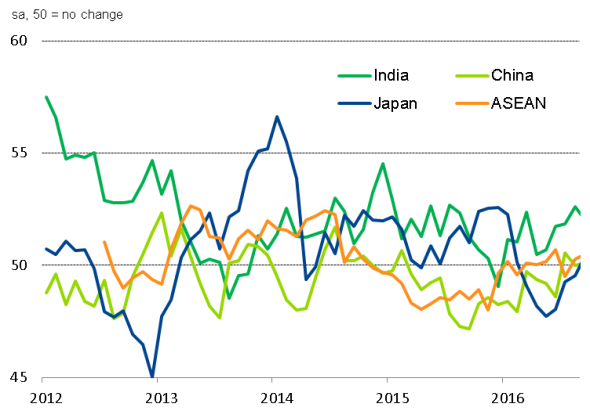