The week sees the release of PMI results which will provide data watchers with the first complete picture of global economic trends over the third quarter as a whole. In the US, the policy debate is likely to continue with non-farm payroll numbers and factory orders data released. Meanwhile, industrial production figures are published in Germany, France and the UK.

Although it is unlikely that the Fed will raise interest rate before December, the release of non-farm payrolls is likely to add to the policy debate in the US. In August, the US economy added jobs at a weaker than expected rate and latest flash PMI results signalled the slowest rise in employment in over four years. The PMI data are consistent with a 120,000 rise in non-farm payrolls in September, but there is an expectation that jobs growth should recover. The latest IHS Markit US Economic Outlook predicts monthly non-farm payroll growth of 169k on average over the fourth quarter as a whole.

US non-farm payrolls and the PMI 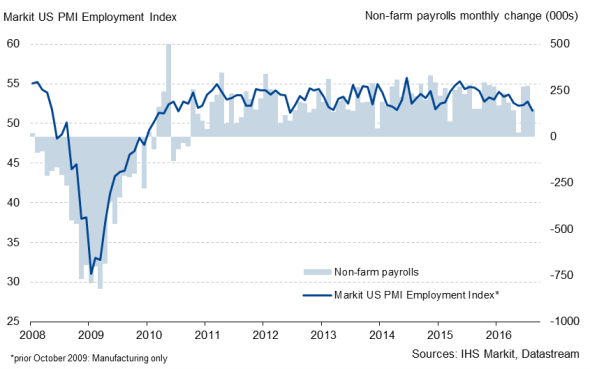 Other important releases in the US include factory orders numbers and final PMI and ISM results. Although factory orders rose less than expected in July, the 1.9% increase was the strongest since October 2015 and analysts will hope to see a further improvement when August's data are published on Wednesday.

The Bank of England will be eager to see the latest UK PMI data. Analysts will be watching to see if the pace of economic growth continued to build, or whether the solid rebound in the August PMIs reflected a 'dead cat bounce'. A particular focus will be on the services data, released on Wednesday.

Markets will also be interested in official industrial production data from the UK Office for National Statistics. The official measure showed a decline in manufacturing output in July, thereby confirming the signal sent by the business surveys. However, the PMI rebounded in August, with manufacturers reporting the strongest expansion in output since January, helped by the largest jump in export orders for over two years.

Official industrial production numbers are also out in France, Germany and Spain on Friday, and will provide more important information on industry trends in the eurozone. Industrial output fell sharply in July, but at least part of this was attributed to a calendar-caused surprise fall in Germany, which is likely to be followed by a solid rise in August.

The outlook in Spain is more uncertain amid the ongoing political stalemate. Latest PMI results signal that Spain's manufacturing sector appears to be heading towards stagnation.

PMI results for September are meanwhile released in over 30 countries across the globe and although the global PMI nudged up in August, the survey data point to annual global GDP growth of only 1.5% in the third quarter so far. Of particular interest will be Japan, where the central bank recalibrated monetary policy framework as growth slowed. Emerging markets meanwhile continued to enjoy their strongest expansion for one-and-a-half years, although the rate of growth remained weak by historical standards. 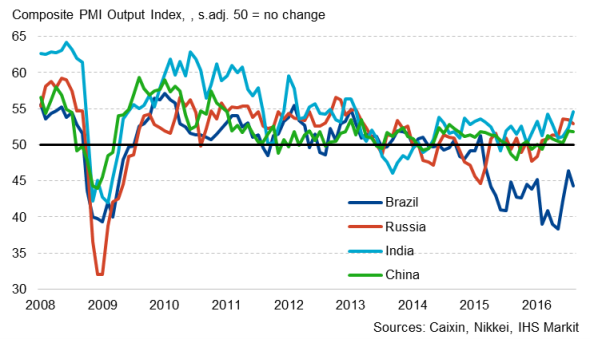 The latest AIG Manufacturing Index is released in Australia.

The US sees an update on construction spending numbers.

Data on building approvals are released in Australia.

Consumer price figures are updated in Russia, while producer price data are out in the eurozone.

Construction PMI and mortgage rate data are released in the UK.

In Brazil, industrial output numbers are out.

In Australia, the latest AIG Services Index and retail sales numbers are published.

Business confidence figures are meanwhile out in South Africa.

The US sees updates on mortgage data as well as factory orders, trade and ADP employment figures.

Trade data are issued in Australia.

Initial jobless claims numbers are out in the US.

The AIG Construction Index is published in Australia.

Industrial production data are issued in Germany, Spain and France, with the latter also seeing the release of current account and trade numbers.

In the UK, Halifax updates its house price data, while the Office for National Statistics issues industrial output and trade figures.

Canada and the US see an updates on labour market data.