Emerging market bonds ETFs are the high conviction trade of the year so far. Not even a coup from one of the most active issuers has dented investor appetite for these relatively high yielding bonds as emerging market bond ETFs saw their best inflow month ever in July, pushing the ytd inflows past $10bn mark for the first time ever. 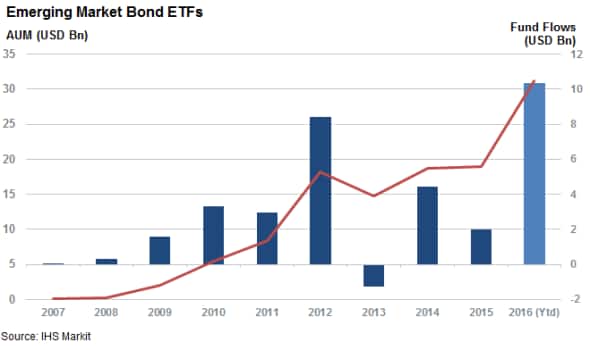 In the ever evolving trade-off between yield and liquidity however, it seems that investors riding the emerging market bond ETF wave have chosen the latter. This preference for the liquidity is evidenced by the fact that products that investing relatively lower yielding hard currency denominated bonds, such as US dollars, but which carry much less currency risk and liquidity constraints, have seen a 70% share of the record $10.3bn that has been invested into the asset class.

Local currency funds have also proved popular. However, the fact that over two thirds of investors are willing to pass up on the 1.43% of extra yield currently offered by the asset class, as gauged by the current difference in weighted average yield to maturity between the iShares J.P. Morgan USD Emerging Markets Bond ETF (EMB) and the VanEck Vectors J.P. Morgan EM Local Currency Bond ETF (EMLC), the largest US listed hard and local currency funds respectively, shows that yield isn't everything.

On top of the obvious currency risk carried by locally denominated emerging market bonds the cautious appetite for the asset class could also be the fact that bonds issued in local currencies tend to be much less liquid than their hard currency peers. The components of the iShares Emerging Markets Local Government Bond UCITS ETF (IEML), the largest locally listed fund, have seen an average of 3.1 quotes in over the last 10 trading days according to Markit Evaluated Bond data, which is a quarter of the 13 average quotes seen in the components of its EMB peer. 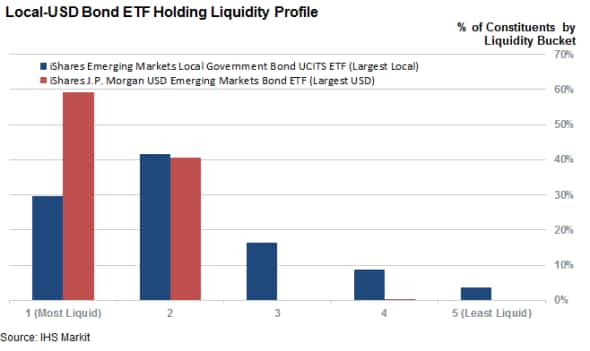 The weaker liquidity profile of locally listed bonds is also evidenced in the cost investors have to incur when trading in and out of the asset class. The bid ask spread of the EMLC is nine bps, which is three times higher than its dollar denominated EMB peer. 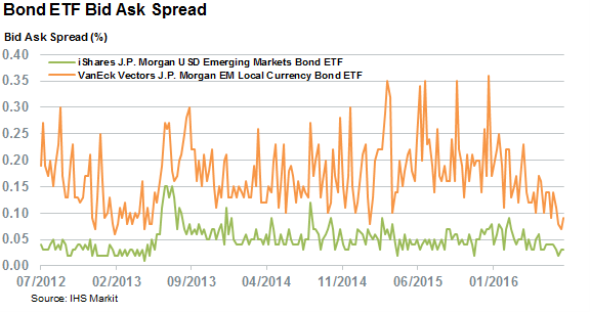 Perhaps most worrying for investors is the fact that the bid ask spread of the EMLC has surged ahead in times of market stress, such as the recent commodities rout, while the EMB's bid ask spread has been much less volatile.