Business conditions in Taiwan continued to deteriorate at a severe rate at the start of the third quarter amid the steepest decline in exports for almost three years.

The Nikkei Manufacturing PMI" rose from 46.3 in June to 47.1 in July, but the upturn merely indicated a slight easing in the rate of contraction. June's reading had been the lowest since August 2012.

The latest reading is consistent with the Taiwanese economy growing at an annual rate of just 0.5% in July, though that's an improvement in the stagnation signalled in June.

The weak survey data suggest that economic growth could disappoint to a significant extent in 2015. At 48.3, the average PMI reading for the second quarter had been the lowest since the third quarter of 2012 and indicative of the Taiwanese economy having slowed sharply. Official data have since estimated that GDP rose by just 0.6% in year-on-year terms in the second quarter.

The poor start to the third quarter suggests that the economy could struggle to grow by even 2% over the whole of 2015 if business conditions fail to revive.

In this respect, an upturn looks doubtful. Of particular concern, the July survey showed Taiwan's goods export orders dropping at the fastest rate since September 2012.

The export struggle largely reflects the weakness of the Chinese economy. China typically accounts for around one-quarter of all Taiwan's exports but has entered a slowdown this year which shows few signs of letting up. The manufacturing economy suffered its steepest downturn for 15 months in July, according to the Caixin Flash PMI. 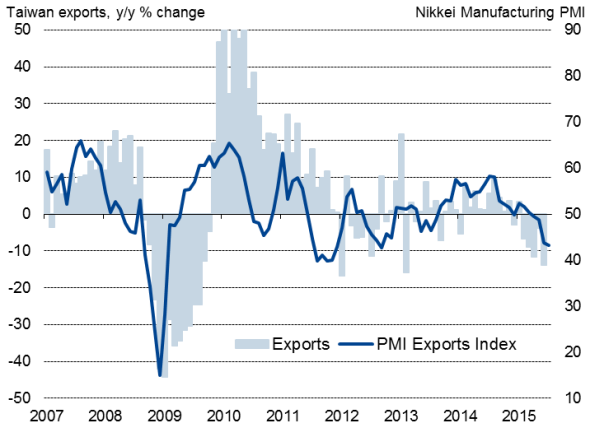 The struggle indicated by the PMI is also being reflected in the official data that are so far available. Current estimates show that manufacturing output contracted 0.9% in year-on-year terms in the second quarter after enjoying 6.5% growth in the first quarter.