Global manufacturing remained stuck firmly in the slow lane at the start of the third quarter, hindered by slumping demand in many key emerging markets.

The JPMorgan PMI", compiled by Markit, was unchanged at 51.0 in July, pointing to one of the weakest growth spells seen over the past two years. The index is broadly consistent with global manufacturing output expanding at an annual rate of just 1.5%.

Global factory output and order books grew only modestly during the month and export orders - a useful guide to worldwide trade flows - stagnated. 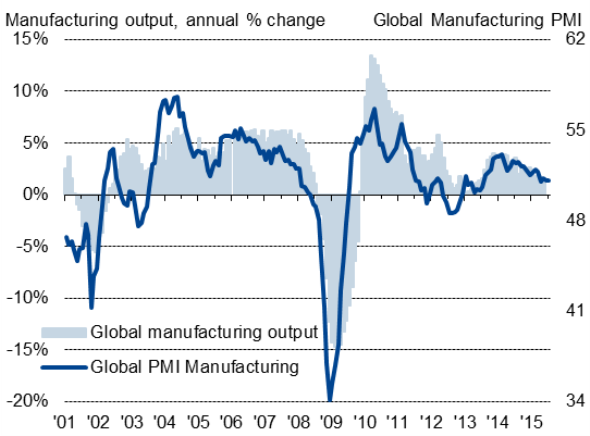 With the exception of Greece, where bank closures and uncertainty surrounding the debt crisis led to the largest downturn seen in the survey's 16-year history, the weakest trends were recorded in emerging markets.

However, emerging market malaise was by no means limited to Asia. Despite its respective PMI rising to a five-month high, Brazil's manufacturing economy continued to report a severe downturn amid the weakened global demand for commodities, sitting two places from the foot of the manufacturing table.

Russia also remained in contraction for an eighth successive month as sanctions from the West and collapsing oil prices dampened the economy.

India, Vietnam, Mexico and a cluster of eastern European countries were left as the few sources of emerging market growth. 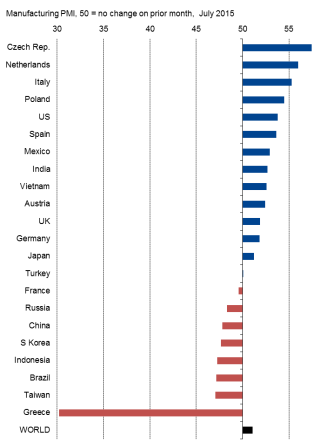 Asian manufacturing growth hit a two-year low despite a slight upturn in the pace of expansion in Japan, although even Japan's growth rate remained disappointingly modest given the unprecedented Bank of Japan stimulus and accompanying depreciation of the yen. Japan's exporters nevertheless reported that rising overseas sales helped offset subdued domestic demand.

A weakened currency also helped the eurozone sustain growth at one of the highest rates seen for just over a year despite the collapse of business activity in Greece. Especially strong growth was seen in the Netherlands, Italy and Spain as firms benefitted from rising export orders, in part linked to the euro's depreciation.

The paucity of growth in the core countries of Germany and France remained a concern, however, with France in particular acting as an anchor on the region's expansion, sliding back into contraction in July.

US, UK struggle with strong currencies

The US recorded one of the strongest rates of expansion of the major world economies, despite its manufacturing sector seeing one of the weakest increases in activity seen over the past year-and-a-half. The dollar's appreciation was widely reported to have hurt export trade.

The UK saw only very modest growth, the PMI suggesting the goods-producing sector could act as a drag on the wider economy again in the third quarter. UK manufacturing has moved down a number of gears over the past year, largely due to the appreciation of sterling, which has hit its highest since 2007 on a trade-weighted basis. The pound is up especially sharply against the euro, hitting competitiveness in the UK's main export market.

However, in both the US and the UK, where strong currencies have subdued manufacturing growth, the detrimental impact on overseas trade was offset by rising domestic demand as consumers benefitted from lower prices (especially reduced fuel costs and falling import prices). 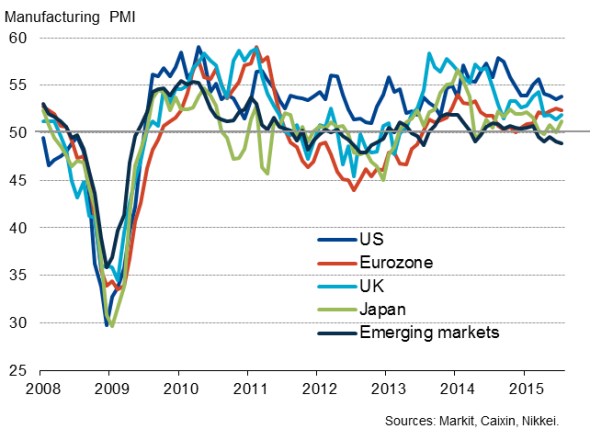 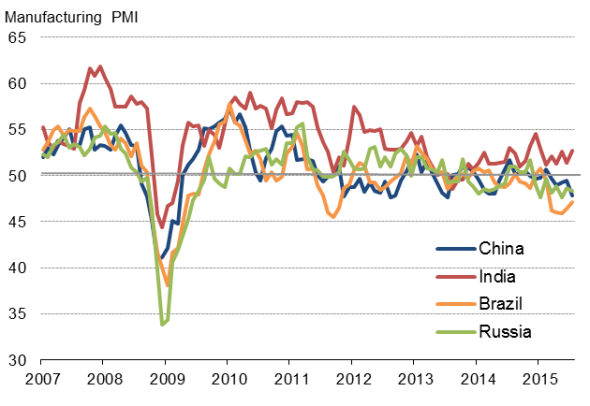