FRTB-CVA: Are you ready for the next piece of the FRTB puzzle?

Regulatory reform over the past decade - driven to a large extent by the Basel Committee - has made managing regulatory capital a priority for banks around the world. The introduction of the Fundamental Review of the Trading Book (FRTB) and the potentially significant capital implications of key decisions banks must make around issues such as non-modellable risk factors, P&L attribution and desk level reporting, further underlines its importance.

While much attention has been focused on the implications of the new regulation on market risk, the landscape for credit valuation adjustment (CVA) regulatory capital is undergoing its own transformation. As such, banks are trying to assess the potential impact of the CVA capital requirements and how they can best be mitigated.

Back in 2015, the Basel Committee on Banking Supervision (BCBS) launched its review of the CVA risk framework. Its objective was to take into account the market risk exposure component of CVA along with its associated hedges, as well as ensuring consistency with the proposed revisions to the market risk framework under FRTB. The review would enhance the current Basel III CVA risk framework, which was implemented in 2010 to respond to the significant CVA losses suffered by banks on their OTC derivatives portfolios during the financial crisis.

The proposed CVA risk framework introduces two new types of risk models: i) the Basic Approach (BA-CVA) and ii) FRTB-CVA which consists of the Standardised Approach (SA-CVA). Consistent with the typical regulatory approach, banks can choose to implement either basic regulatory models or the SA-CVA, which requires regulatory approval and is based upon meeting certain prescribed criteria.

In order to better understand - and minimise - the impact of FRTB-CVA, and other regulatory changes, four large banks commissioned IHS Markit to conduct Quantitative Impact Studies (QIS) at the end of 2015. These studies were based on the draft regulatory parameters and were run on representative portfolios[1]. Although some of the parameters within the regulations have since changed, we found that by moving from BA-CVA (SA-CCR[2]) to SA-CVA, banks could potentially reduce CVA risk capital by 71%. To read the full findings, you can download the paper here.

Since then, the BCBS has made a number of updates to the draft regulatory parameters[3]. Taking these latest changes into account, our updated research shows us that banks that are currently on the Basel III Standardised CVA (Basel III Std CVA) charge using the Current Exposure Method (CEM) as the input for exposure-at-default could face a CVA risk capital increase of 3.5 times (from a ratio of 1.0 to 3.5) when moving to the new framework.

This increase is due to the combined impact of having to move from CEM to the new SA-CCR, and from Basel III Std CVA to the new BA-CVA. See Figure 1 below for more details. 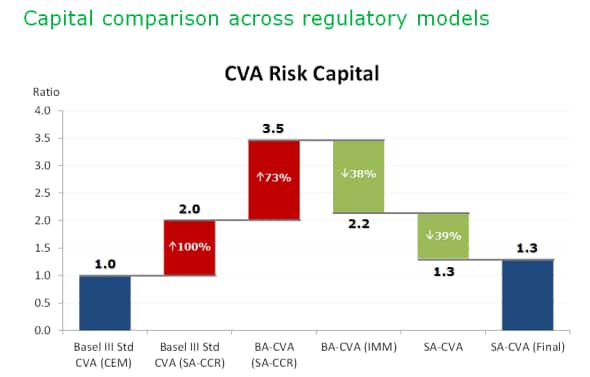 In order to mitigate the impact of this capital increase, banks can instead choose to adopt the new SA-CVA, which could reduce the capital charge by 2.7 times (from a ratio of 3.5 to 1.3).

However, as mentioned earlier, in order to adopt the SA-CVA approach, banks will need to meet certain prescribed criteria. One of the key pre-requisites is that banks that do not already have an active CVA desk in place, will need to set one up for the 'risk management and hedging of CVA'. This will require non-trivial investment in software systems and skilled CVA expertise, to name just two considerations.

The review of the CVA risk capital regulation is expected to be finalised soon at which stage we will update our original paper and calculations. However, suffice to say that banks that have yet to embark on an analysis of the impact of the new regulations could find a huge capital increase looming in the horizon.

[2] SA-CCR is the Standardised Approach which replaces the Current Exposure Method (CEM) and the Standardised Method (SM) in Basel's capital adequacy framework http://www.bis.org/publ/bcbs279.htm