Overseas investors cash out of Japan

The stalling Japanese economy has discouraged overseas investors over the last six months, whose holding of Japanese assets has decreased materially.

The Japanese central bank has had precious little progress to show for its quantitative easing policy and overseas investors are growing increasingly impatient with the country's equities. Last month saw Japanese ETFs listed overseas experience their largest monthly outflow on record when investors withdrew over $3.5bn from the asset class. The outflows seen over April add to those seen in the previous four months which means that investors have withdrawn a cumulative 20% from the 182 ETFs which provide overseas investors exposure to Japan. 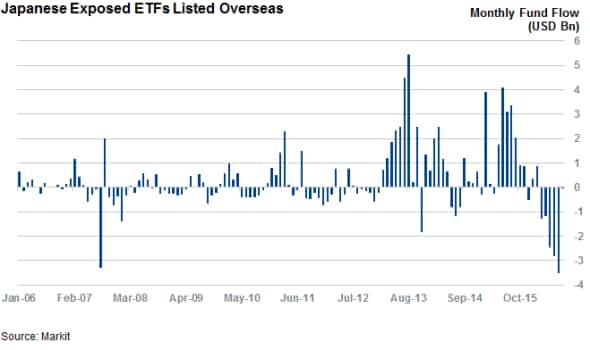 This is unprecedented in cash terms as investors have withdrawn over $11bn from these funds since the overseas exodus started in the closing month of last year.

The outflows were justified last Thursday as the Nikkei 225 index, which tracks Japanese shares, fell by 7.5% in the following two trading days after Japanese policy makers passed on an opportunity to add to their extensive monetary easing policies.

The large outflows seen in the weeks leading up to last week's announcement showed that investors were putting little faith in the 17% rally seen by Japanese equities in the six weeks since the markets started to rally from the lows seen in the second week of February.

The WisdomTree Japan Hedged Equity Fund has seen $3.6bn of outflows, and its unhedged peer the iShares MSCI Japan ETF has lost $3bn of assets this year to date. The former of the two funds has also had to contend with the rising yen which dented its returns compared to its conventional peer, which has been able to offset some of the recent losses as the value of its assets have risen in dollar terms as the yen strengthened against the dollar. 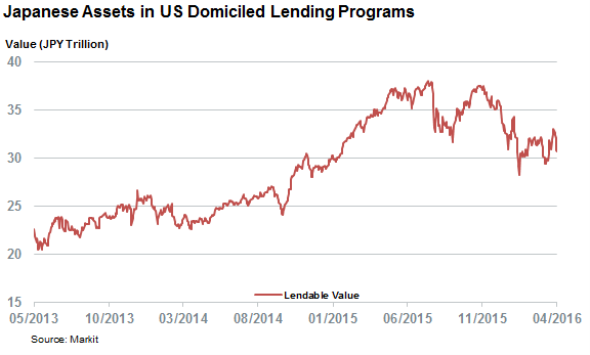 This essentially means that US investors have either been withholding their assets from being lent over the recent volatility, or that these assets have been sold off and are no longer with their US-based holders.

While overseas investors have been actively trimming their ETF exposure, domestic investors have been filling in most of the gap given that domestically listed Japanese equity ETFs saw $12.9bn of inflows in the first quarter. But this momentum has lost steam in the last few weeks, as these ETFs saw $4.8bn of outflows over April.