Prospects for the Japanese economy have brightened at the start of 2017. Business conditions in Japan continued to improve following a pick-up late last year, adding justification to upgraded growth forecasts from the central bank. 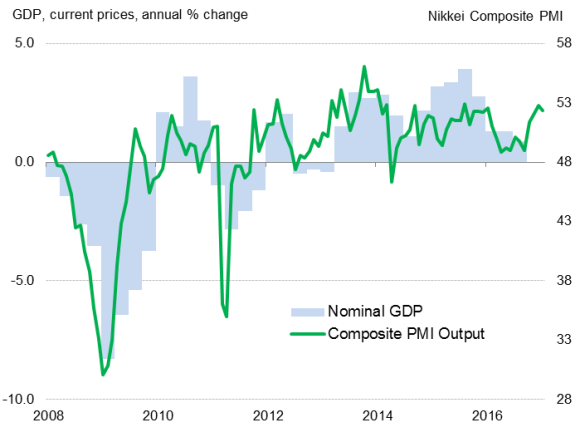 While survey data showed the service sector expanding again in January, manufacturing growth did most of the heavy lifting, led by increasing volumes of exports.

At 52.3, the Nikkei Japan Composite Output PMI, compiled by Markit, was down from 52.8 in December, but it remained indicative of a steady improvement in the health of the Japanese economy.

Encouragingly, the latest surveys showed growth in new orders to have accelerated to the fastest in three years, with optimism about future output surging to the highest in 17 months. The upturn prompted Japanese companies to continue growing their workforce numbers, with January seeing the strongest monthly employment growth for over two-and-a-half years.

Continuing the trend seen towards the end of last year, the manufacturing industry was the faster growing of the two sub-sectors monitored by the survey. Expansion in manufacturing output, new orders and employment outpaced that seen in services.

Demand for Japanese manufacturing goods is being supported by resilient domestic demand, but it was stronger overseas demand that provided the main boost to the manufacturing upturn, with January seeing the largest rise in new export orders since January 2016.

Better export performance was reflective of the recent depreciation of the yen, which has made Japanese exports relatively cheaper to overseas clients, but also attributable to stronger demand in key foreign markets. 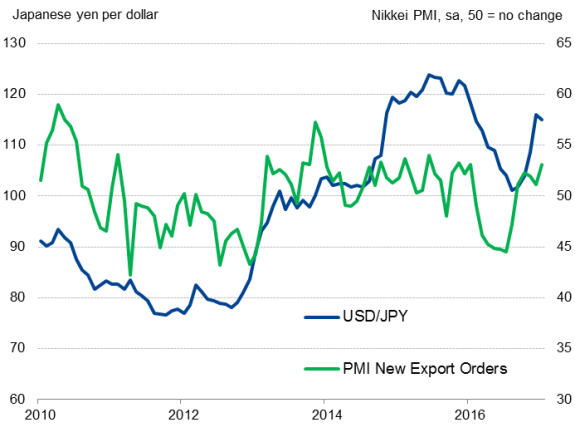 Global manufacturing activity ended 2016 on a robust footing, as advanced economies continued to gain momentum and a recovery in emerging markets was maintained. If this trend continues in 2017, foreign demand for Japanese products will likely increase further.

Signs of building capacity constraint pressures in the Japanese economy were also evident. The level of outstanding business rose for the first time in a year during January, suggesting that continuing jobs growth is likely as firms add to capacity to meet rising demand.

Output expansion was also accompanied by greater inflationary pressures in January, with companies' input prices rising at the fastest rate in just over two years. Higher costs for raw materials and fuels were primarily behind the increase in input prices, as well as the yen's depreciation. 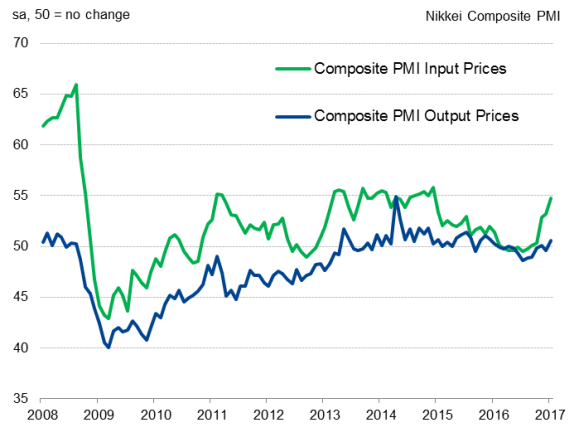 At first glance, rising cost inflation is welcome news to a country that seeks to beat deflation. January composite data indicated the greatest rise in companies' selling prices since December 2015. However, charge inflation remained relatively muted, showing a pace of increase well below the growth in costs. It was therefore no surprise that, while raising its growth estimates at the recent policy meeting, the Bank of Japan chose to maintain current projections on inflation.

Nonetheless, despite a subdued trend in consumer prices, the broader private sector upturn will at least provide encouragement that Japan's economic recovery is on track after four years of Abenomics.