The UK economy exhibited signs of fortitude in the face of multiple headwinds in January, with growth edging higher despite intensifying uncertainty about the business outlook. However, a slowdown in hiring and waning order books raise doubts about the sustainability of such solid growth. 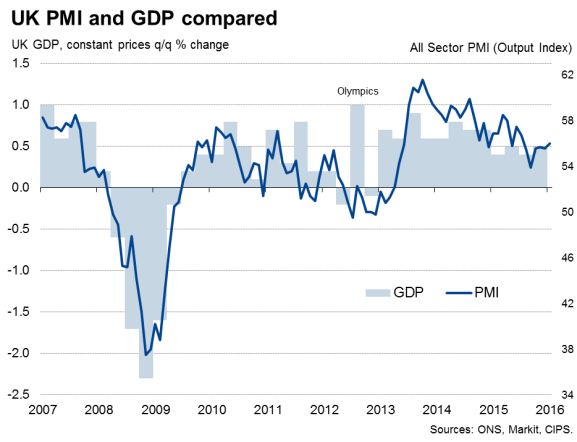 During a month in which financial markets slumped at home and abroad amid growing risk aversion, and central banks lined up to express concern over the global outlook, the Markit/CIPS UK PMI surveys surprised the markets by signalling a marginal upturn in the pace of economic expansion. The weighted average Output Index from the three surveys edged up from 55.6 in December to a six-month high of 56.0.

At this level, the survey data are signalling an upturn in GDP growth from 0.5% in the final quarter of last year to 0.6% at the start of 2016.

Not all survey indices improved, however, suggesting there is a significant risk that growth will slow in coming months. Although inflows of new orders continued to rise at a robust pace, backlogs of uncompleted orders fell at the fastest rate since March 2013, suggesting firms may seek to cut capacity unless demand revives.

Employment showed one of the smallest gains seen for over two years as hiring slowed in response to the deteriorating order book pipeline.

Backlogs of work and employment 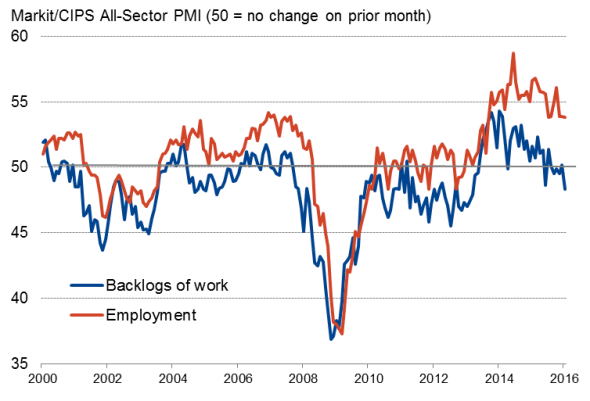 The January survey also pointed to an ongoing lack of inflationary pressures. Average prices charged for goods and services barely rose, as a slight upturn in service sector price inflation was offset by an increased rate of decline in factory gate prices. The latter was in turn linked to a further steep drop in input costs, the result of further falls in global commodity prices.

The improvement in the overall rate of economic growth signalled by the surveys pushes the PMI into territory which would have historically been associated with the Bank of England typically considering higher interest rates. However, with the increased uncertainty about the outlook and persistent lack of inflationary pressures, the majority of policymakers will no doubt be more worried about avoiding another downturn than whether the economy needs higher interest rates. 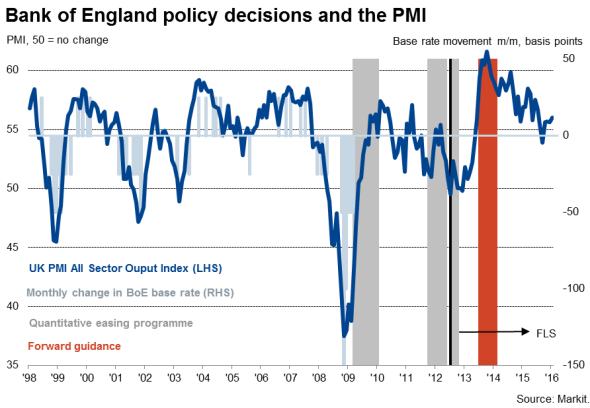 The key backbone of the upturn continued to be the service sector due to its sheer size, with the survey indicating a slight uptick in growth of business activity in January, albeit still running well below levels seen this time last year.

The marginal upturn in the pace of service sector growth was accompanied by a faster rate of expansion of factory output, which showed the largest rise for just over one-and-a-half years.

There were mixed messages on order books: although inflows of new business into the service sector gained momentum, backlogs of work fell at the fastest rate for almost three years. Firms' optimism about the year ahead also slipped further to a three-year low.

The sustainability of the manufacturing sector's growth is also called into question. A further weak increase in new business during the month was reported as exports "- hampered by the strong pound - fell for the first time in five months. With factories reporting the largest cut in headcounts for almost three years in January, there are already signs that manufacturers are taking steps to reduce excess capacity in response to disappointing demand.

Finally, while the construction sector also continued to expand, the rate of growth eased to the weakest since last April to show one of the smallest improvements seen over the past two-and-a-half years. The survey showed weaker rates of increase for housebuilding and commercial construction, which includes offices, industrial units and retail outlets, while civil engineering remained especially weak. 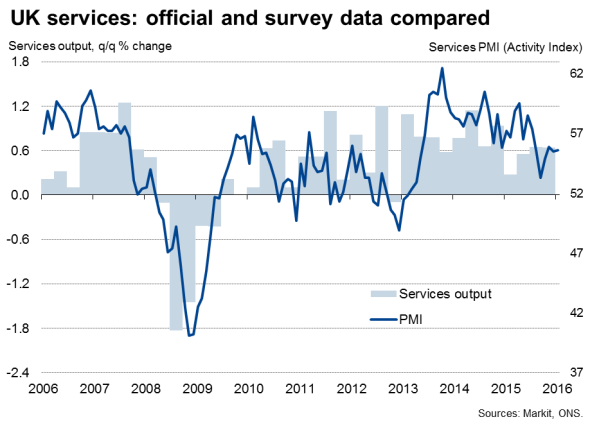 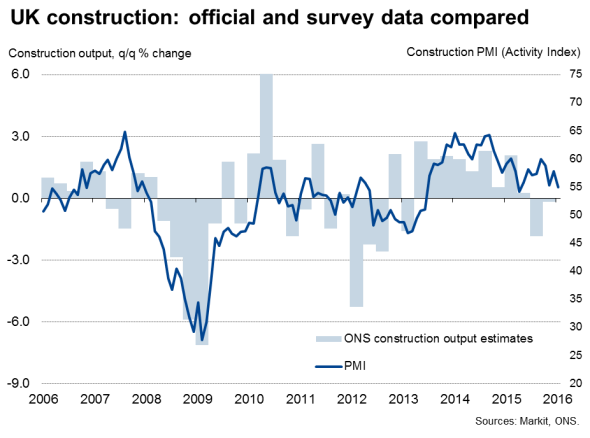