Positive end to 2017 for Thailand manufacturing

Thailand's manufacturing economy ended an otherwise unspectacular year on a positive note. December PMI data showed an improvement in operating conditions driven mainly by stronger output growth. However, other survey indices sound a note of caution over the outlook.

The Nikkei Thailand Manufacturing PMI™, compiled by IHS Markit, rose from 50.0 in November to 50.4 in December, signalling a marginal improvement in the sector's performance.

The upturn in the final month of 2017 took the average PMI reading for the fourth quarter to 50.1, up from 49.8 in the third quarter, suggesting that manufacturing may provide a boost to economic growth at the end of the year. 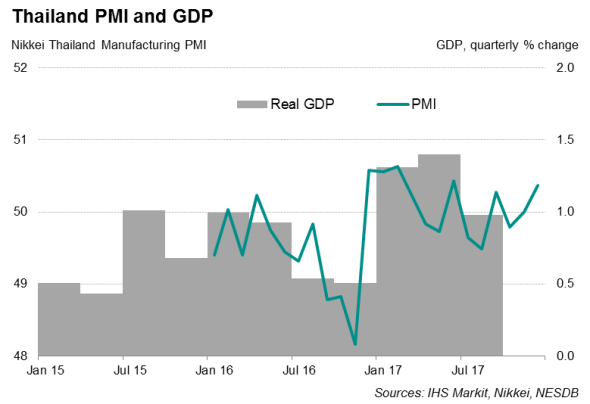 Historical comparisons suggest the PMI is indicative of quarterly GDP growth of 1.1% (4.8% year-on-year) for the closing quarter of 2017, up from 1.0% (4.3% year-on-year) in the three months to September. The annual PMI-implied GDP growth rate for the fourth quarter will place full-year annual expansion at around 4%, close to the Bank of Thailand's GDP projections.

The improvement in the health of the manufacturing sector was accompanied by the largest increase in input costs for nine months. Higher prices for oil and other raw materials had fed through to input cost inflation, which raises the possibility of consumer price inflation moving higher as firms pass on higher costs to customers.

The PMI's gauge for input prices tends to change ahead of headline consumer inflation, suggesting that CPI will likely break above 1% in December. 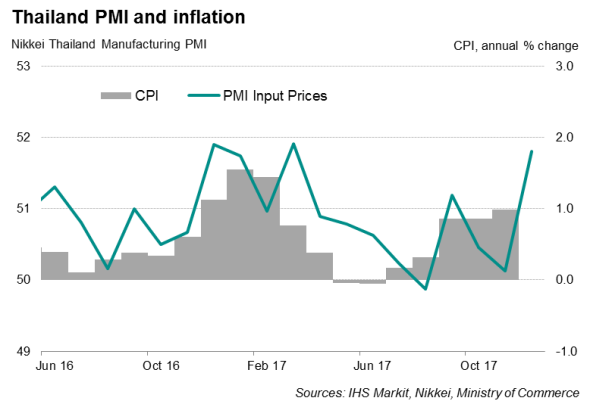 Comparing supply chain performances and prices provide clues as to the extent to which inflation is being driven by improving demand. December survey data showed that suppliers were not becoming busier, with shorter delivery times commonly reported, suggesting that the recent price rises were not associated with demand exceeding supply.

As such, with the inflation rate being led higher by supply-side factors rather than increased demand, the odds are that the rate may soon cool as these pressures subside. Furthermore, the baht's strength will likewise help rein in imported inflationary pressures in coming months.

The full-year average PMI reading of 50.1 signalled largely stagnant manufacturing business conditions in 2017 despite representing an improvement from the 49.5 seen in 2016. Moreover, forward-looking survey indicators suggest the coming year may prove equally subdued.

Inflows of new orders remained soft while inventories of finished goods increased again, pointing towards a slowdown in production for January. Meanwhile, a lack of capacity pressure continued to dampen hiring prospects. Business expectations about the outlook for the year ahead remained among the lowest in the survey's two-year history.

Official data from the National Economic and Social Development Board showed that GDP growth rose 4.3% year-on-year in the third quarter. Digging into the details revealed that while a significant contributor to economic growth in the first three quarters of 2017 came from capital investment (which includes changes in inventories), it was mostly due to lower levels of stock depletion compared with a year earlier. This reflected possible difficulties in moving stocks because of subdued demand. 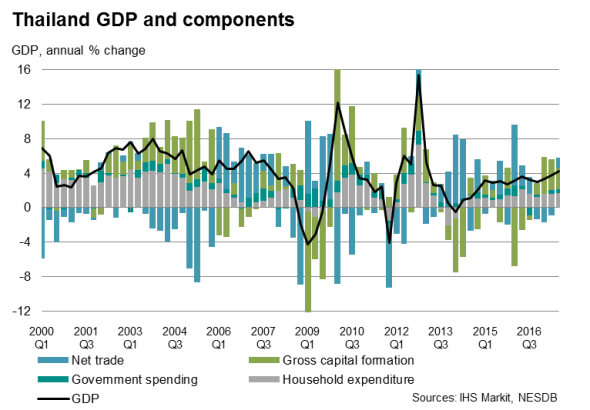 The less-than-optimistic outlook lends support to the recent decision by the Bank of Thailand to leave policy unchanged at its December meeting. The central bank noted that the current accommodative policy stance will continue to support economic growth and foster a return of inflation to its target. 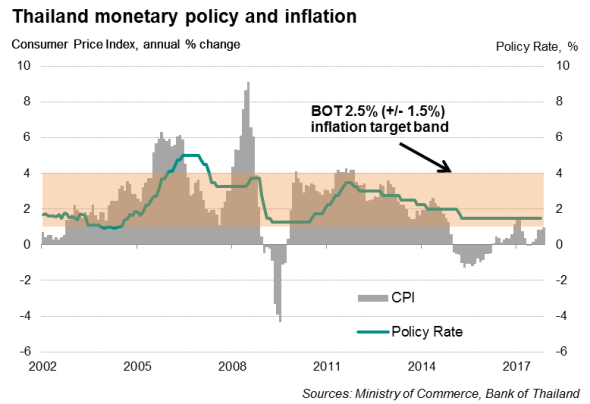 The next Nikkei Thailand Manufacturing PMI results (for January) are released on February 1st and will provide signals as to the underlying economic and inflation trends of Thailand's economy at the start of the year.