The UK construction industry looks to have pulled out of its downturn, with improved PMI survey readings in the closing months of 2017 compared to the autumn. However, the survey also indicates that a lack of business investment is leading to falling commercial activity, leaving the construction sector reliant on house building to support growth. 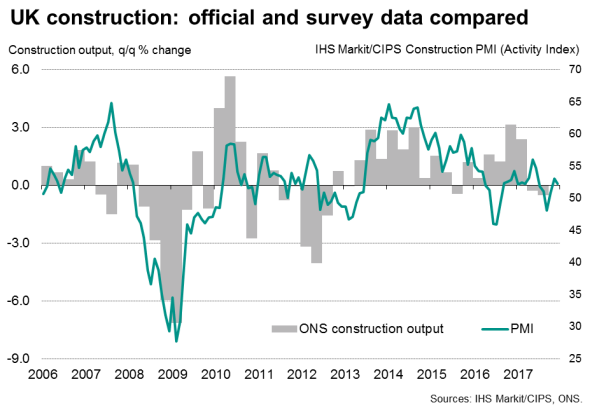 The IHS Markit/CIPS Construction PMI fell from 53.1 in November to 52.2 in December, ending the year with growth slowing from November's five-month high but still notching-up the second-best monthly performance since June. The data therefore provide some evidence to suggest the building sector stabilised in the fourth quarter. Both survey and official construction output data had been especially weak in the third quarter, with both sources registering falling output. Official (ONS) data showed output down 0.5% in the third quarter, following a 0.3% drop in the second quarter to send the sector into a technical recession.

However, despite the improved readings in recent months, the construction PMI has remained very subdued by historical standards, suggesting the sector will have made a minimal contribution to overall economic growth in late-2017.

Digging down into the details of the data provides insight into divergent trends within the construction industry. 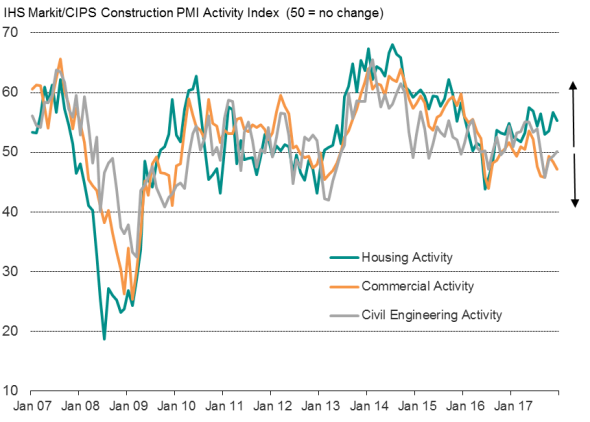 December's upswing in construction activity was the result of increased house building, which has enjoyed solid, albeit variable, growth over the past sixteen months, likely reflecting low interest rates alongside government policies and stimulus aimed at boosting the housing market, such as cuts to stamp duty, Help-to-Buy, Buy-to-Let and Build-to-Rent.

In contrast to the solid growth of house building, commercial building activity fell for a sixth successive month in December, with the rate of decline gathering pace. The downturn means commercial construction is suffering its worst patch since early-2013, and its second-worst since the global financial crisis.

Commercial construction comprises the building of offices, shops, industrial units and other fixed business assets. The decline therefore points to a drop in demand for such assets, and as such highlights a deteriorating trend in business investment. 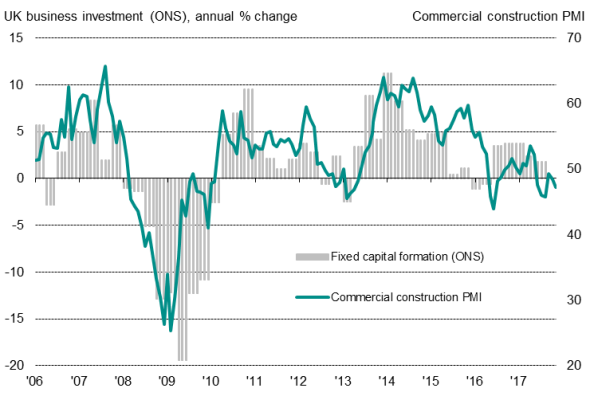 The reduction in investment signalled most likely reflects historically low business optimism regarding the economic outlook. PMI survey data for the second half of 2017 indicated that business optimism was running at extremely low levels by historical standards, in the vast majority of cases attributed to growing uncertainty regarding Brexit. 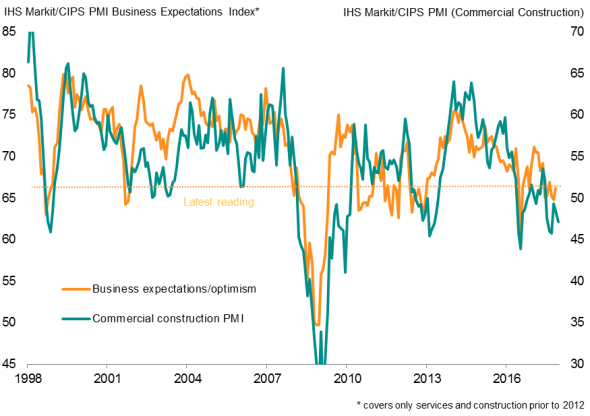 While the resilience of the pace of economic growth seen throughout the year in the face of such heightened business uncertainty has been a welcome surprise, the survey data suggest that the cost of such uncertainty has in fact been a drop in fixed asset investment, which could dampen future growth.

A second area of concern is the weakness of civil engineering activity in recent months. The PMI survey showed activity merely stagnated in December after declines in the prior three months. A lack of any significant growth of civil engineering activity since July, alongside falling commercial activity, therefore left the construction sector entirely reliant on house building to support growth in the second half of 2017.