Philippines manufacturing growth remains solid at the end of 2016

December survey data showed that the Philippines manufacturing industry ended 2016 by continuing the trend of solid growth seen during the second half of the year, albeit with some loss of momentum. However, robust expansions of both production and new business were accompanied by sharply higher costs, with the absence of similar growth in selling prices suggesting margins were squeezed.

The Nikkei Philippines Manufacturing PMI posted 55.7 in December, signalling another robust improvement in the health of the sector. Manufacturing conditions strengthened in each month since the survey started in January 2016. The second half of 2016 saw an average PMI reading of 56.3, compared to 54.9 in the first half. 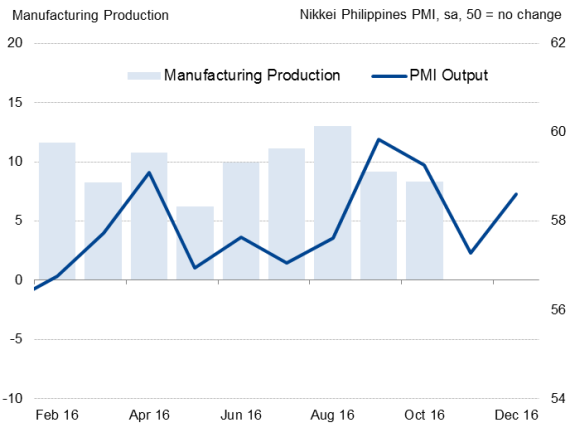 While manufacturing business conditions continue to improve at a solid pace, the headline PMI dipped for the third successive month and was barely above its 2016 average. Factory orders grew at the slowest rate in nine months, albeit one that was still strong overall. Latest employment growth was the lowest since August and below the annual average. 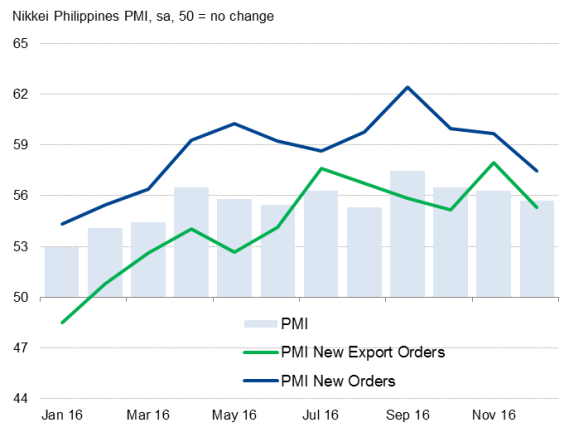 Furthermore, plans by the Duterte administration to increase the infrastructure spending in 2017 are expected to boost manufacturing activity.

Inflationary pressures, meanwhile, continued to intensify at the end of the year. Higher global prices for many commodities, including oil and metals, pushed input costs up to the greatest extent in the 12-month survey history. A weak peso also fanned imported inflation. Although higher costs have not been unique to the Philippines, with the global manufacturing prices surging at the highest pace in over five years in November, Philippines manufacturers were unable to raise selling prices as quickly. Such situations will act to erode profit margins if they persist. 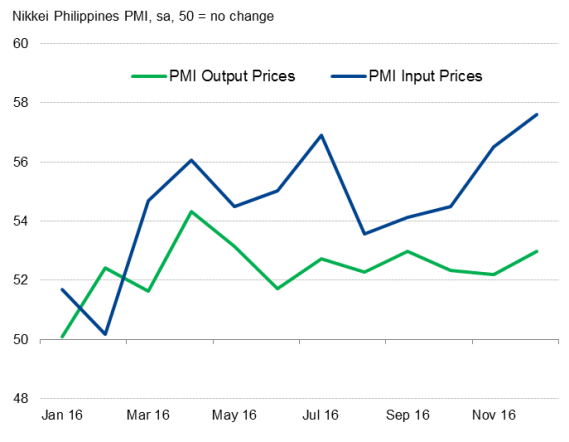