Global manufacturing enjoyed its strongest improvement in business conditions for six-and-a-half years in October, according to the latest PMI surveys. Less encouraging was a drop in optimism about future output growth, as well as some of the strongest price pressures for over six years. However, survey evidence suggests that some of the rise in prices may prove short-lived.

PMI at highest for over six years

The headline JPMorgan Manufacturing PMI, compiled by IHS Markit, edged up from 53.3 in September to 53.5 in October, its highest since April 2011. 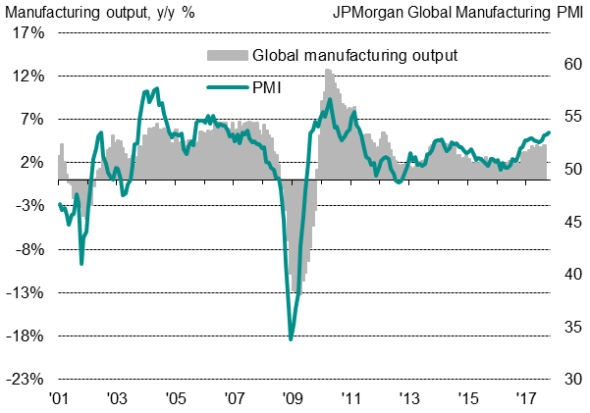 While the current upturn remains weaker than the expansion seen in 2009-11, the broad-based nature of the expansion is encouraging in terms of its sustainability. Only three of the 29 countries covered by IHS Markit's manufacturing PMI surveys reported a deterioration in business conditions: Malaysia, Mexico and Thailand. Notably, the bottom 11 countries were all emerging markets, and included China, India, Russia and Brazil.

European countries continued to dominate, holding all top eight places in the global manufacturing rankings. Northern European countries fared especially well, with the upturn led by Germany, followed by the Netherlands, Austria and the Czech Republic.

Australia saw the fastest growing manufacturing sector outside of Europe, followed by the US. 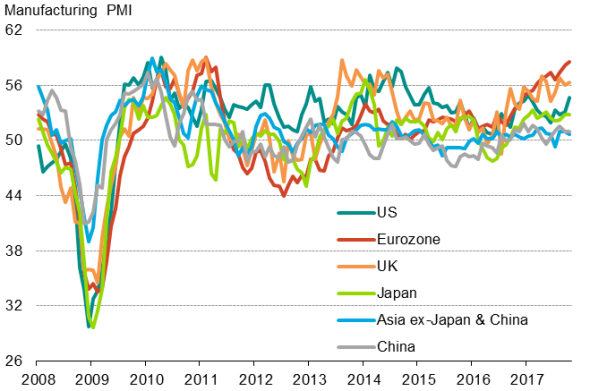 The manufacturing upturn was again accompanied by rising price pressures. Average input prices showed the second-largest monthly rise since May 2011, exceeded only by the rise seen in January.

Price increases were often associated with suppliers being busier, as indicated by delivery times lengthening to the greatest extent since 2011. Busy suppliers are generally more able to negotiate increased prices with manufacturers, who are in turn keen to ensure adequate supply of inputs.

A period of rising prices that is accompanied by longer delivery times generally points to rising core inflationary pressures. (Times of rising prices in the absence of delivery delays may be caused by speculation in commodity markets, an oil price shock or exchange rate effects, which often lead to only a temporary uplift in inflation.)

However, care must be also taken in associating higher prices with longer deliveries. In the current situation, longer delivery times have in part been the result of hurricane disruption in the US, which has generated a short-term price spike for many items as firms seek to build safety stocks. A similar, though more extreme, situation was seen in the aftermath of the Fukushima disaster in 2011.

A comparison of current output growth and delivery times helps further identify the extent to which supply chains - and therefore prices - are being affected by supply rather than demand factors. Delivery times are in effect lengthening more than expected given the current output growth. The suggestion is, therefore, that at least some of the current global input cost inflation reported by manufacturers will be temporary. 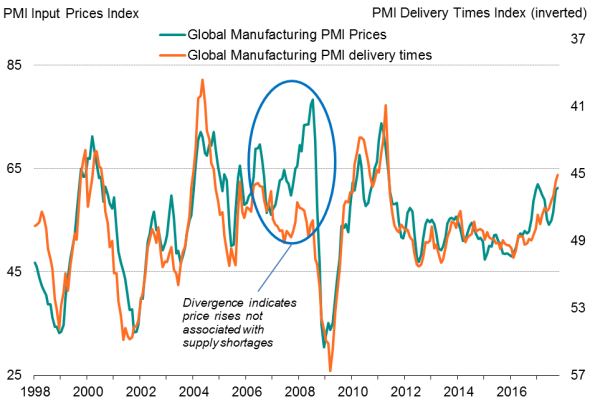 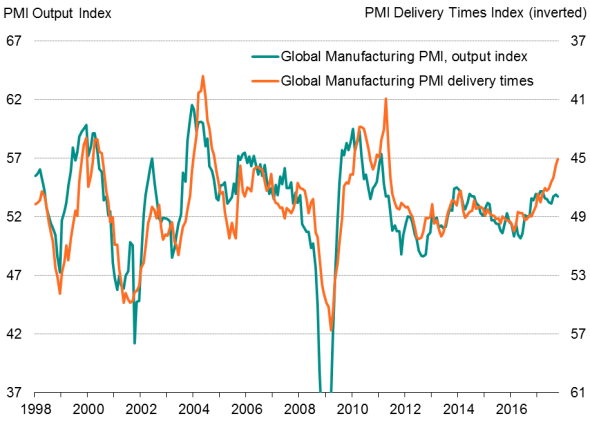