China's manufacturing economy started the fourth quarter on a firmer footing, with the sector still in decline but the rate of contraction easing amid a stabilising of export sales.

The Caixin China Manufacturing PMI (compiled by Markit) rose from a six-and-a-half year low of 47.2 in September to 48.3 in October, its highest since June. The rise merely indicated an easing in the rate of deterioration of manufacturing business conditions. The survey has now signalled a downturn in business activity in ten of the past 11 months. However, the upturn in the PMI - the largest monthly rise for 16 months - provides some encouragement that the manufacturing sector's slowdown may be at least bottoming out. 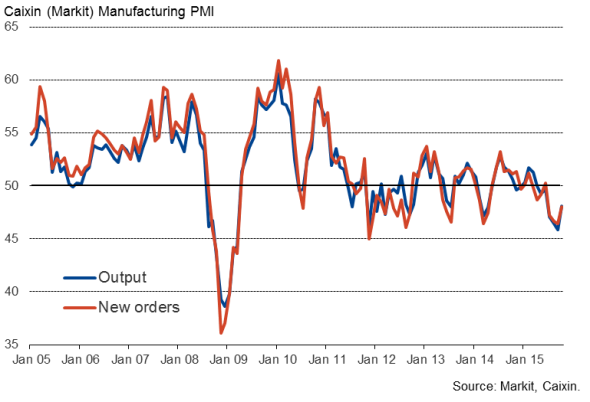 Output and new orders had both fallen at increased rates in September but in both cases the rates of decline eased in October. It was nevertheless the sixth consecutive monthly drop in factory output, suggesting that the sector continued to act as a drag on the economy at the start of the fourth quarter, weighed down in particular by an ongoing slump in orders from domestic customers. 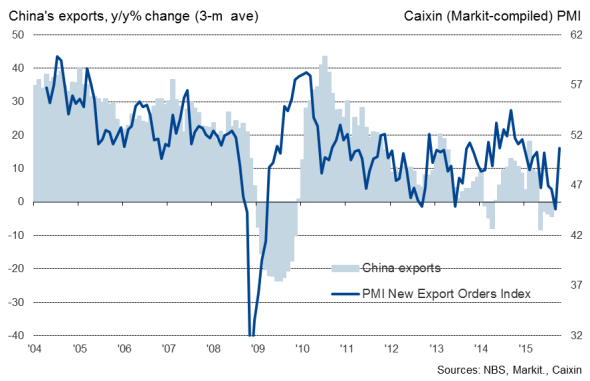 The survey's measure of new export orders rebounded sharply in October, signalling a marginal rise in orders from abroad after the steep decline seen in September. The rise in exports was the largest since last December and the first increase since June. Anecdotal evidence from exporters was scant, but the data indicate that the recent devaluation of the yuan is beginning to have a beneficial impact on China's exports. 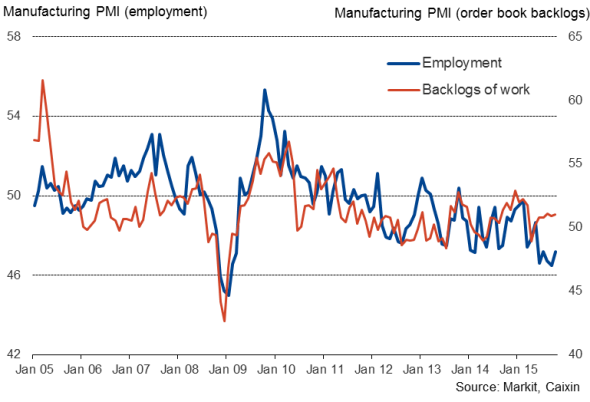 The survey also pointed to continued efforts by manufacturers to boost productivity and cut excess capacity. Although the rate of job cutting eased slightly, factory employment continued to fall at one of the strongest rates seen since the height of the global financial crisis. With headcounts being cut, the drop in operating capacity meant backlogs of uncompleted work rose slightly again during the month. 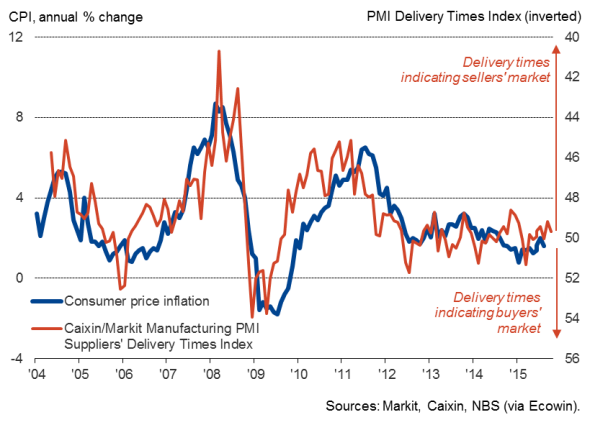 Average input costs and producers' selling prices continued to fall sharply in October. However, the rates of decline moderated slightly. Recent price falls have been commonly linked to price discounting as supply has exceeded demand. However, in recent months the PMI survey's Suppliers' Delivery Times Index has pointed to a slight lengthening of supplier lead times, which in turn points to demand and supply coming back into balance.