US job creation cools in August

News that the US economy added jobs at a slower than expected rate in August, and that wage growth slowed, reduced the odds of a Fed rate hike in September.

The data-dependent Fed will most likely see the payroll numbers as taking pressure off any immediate need to hike interest rates, significantly reducing the scope for further policy action in September. However, with survey data linking some of the recent slowdown in hiring and business activity to uncertainty ahead of the presidential election, a rate rise later in the year, most likely December, remains on the table providing the economic data flow picks up again in the fourth quarter. 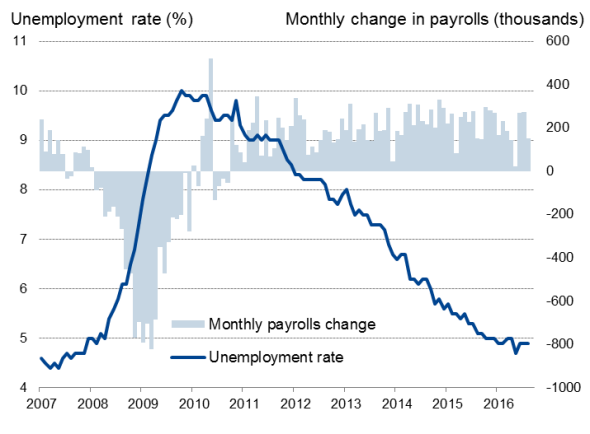 Official data showed non-farm payrolls rising by 151,000 in August, coming in below market expectations of a 180,000 increase. However, with data for both June and July having smashed expectations, the average increase for the past three months is a robust 232,000, its highest since February, suggesting that some policymakers could look through the monthly volatility and focus on the solid underlying trend, pushing for an early rate hike.

Moreover, with the unemployment rate holding at 4.9% any slowing in the rate of job creation also needs to be looked at in the context of the state of near full employment and should perhaps come as no surprise.

However, the reduced rate of job creation was also accompanied by news that average hourly earnings rose by a meagre 0.1%, meaning the annual pace of pay growth fell to 2.4%.

Questions over pace of economic growth

The disappointing August numbers also come on the back of survey data which call into question the extent to which the economy is reviving after a sluggish first half to the year. IHS Markit's PMI data - which defied the consensus and accurately predicted the subdued economic expansion in the first two quarters - indicate that the US economy continued to expand at only a modest pace in both July and August.

An annualised GDP growth rate of just under 1% is currently signalled for the third quarter, based on the PMI data for July and August, suggesting the economy has failed to accelerate from the weak 1.1% pace seen in the second quarter.

The PMI also showed that slower growth of demand and subdued business optimism caused employment growth to slow to the weakest for over two years. The survey data were broadly consistent with non-farm payrolls rising by just under 130,000 in August.

However, anecdotal evidence from the surveys also indicated that at least some of the current weakness in business activity and hiring is due to uncertainty about the economic outlook in the face of the upcoming presidential election, meaning growth could either rebound sharply or sink lower depending on the result. Given current weak inflation signals, it would therefore seem sensible to expect the Fed to wait until after the election before adjusting policy.