The UK construction boom continued in August, according to buoyant PMI" survey data. Activity rose strongly, generating another near-record increase in hiring. But the pace of growth is causing supply problems, with the availability of materials and subcontractors deteriorating at record rates. Sub-contractors were able to charge more in the face of such strong demand, and average rates levied rose to the greatest extent seen in the survey history. Material costs meanwhile showed the largest jump for just over three years as demand outstripped supply.

The strength of the data, in terms of both the pace of expansion and inflationary pressures being signalled, add to the case for interest rates to rise. However, with construction only accounting for 6% of the economy and manufacturing growth waning in August, it will need an especially buoyant picture in tomorrow's service sector PMI for any policymakers to be comfortable in voting for higher interest rates.

The Markit/CIPS Construction PMI" jumped from 62.4 in July to 64.0 in August, signalling the largest monthly rise in building activity since January and one of the largest ever seen in the survey's 17 year history. 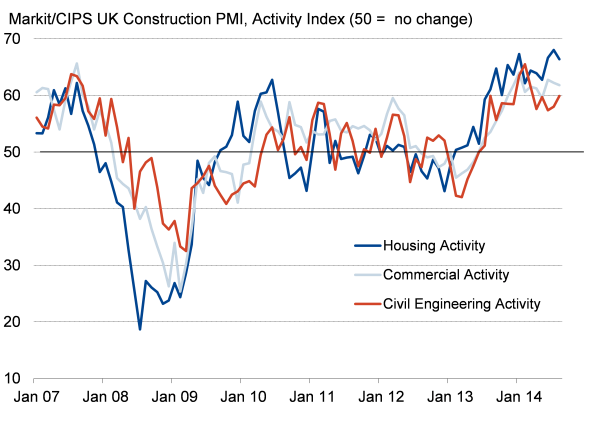 The upturn was led by yet another near-record increase in house building, but commercial activity and civil engineering also rose at historically strong rates, reflecting a broad-based recovery fuelled by a mixture of rising residential property demand as well as increased business spending on office space, industrial capacity and retail outlets.

Forward-looking indicators were encouraging, suggesting the construction sector will continue to support the economic recovery in coming months. New orders in the industry continued to rise strongly in August at a rate rarely exceeded in the survey's history, albeit with the rate of increase slowing marginally for a second month running. Business expectations about the year ahead meanwhile picked up for a second month, hitting the highest since March. More than half (59%) of all firms expect business activity levels to rise over the coming year while only 7% expect a decline.

The concern is that shortages of both raw materials and suitable subcontractors could start causing growth to slow, and could push up inflationary pressures within the sector. 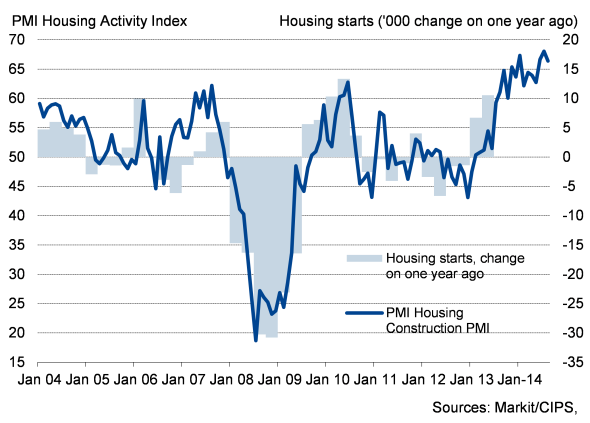 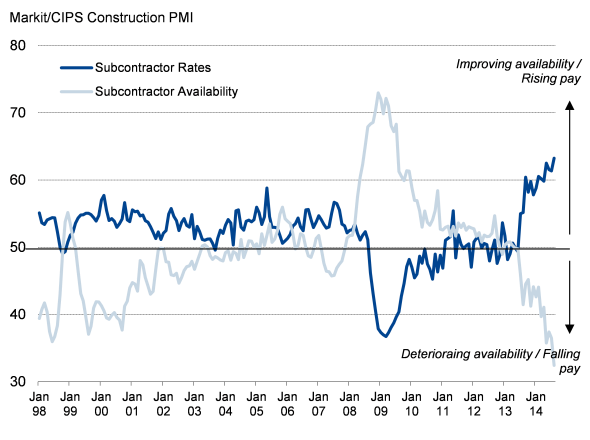 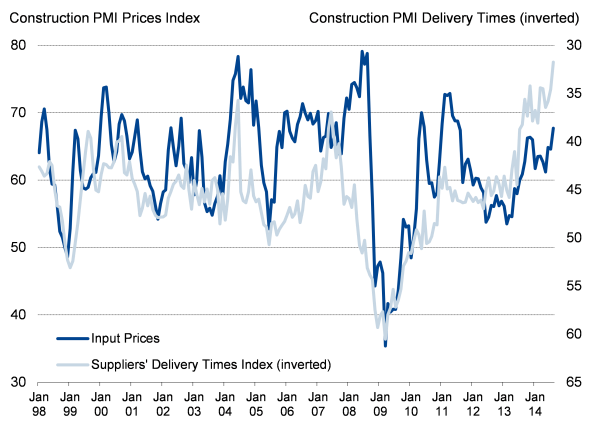 * The Suppliers' Delivery Times Index measures the average time taken to provide materials to construction firms. A lower reading signals more delays/deteriorating performance, and hence means suppliers are busier, which in turn means prices can often be raised. The Delivery Times index is inverted in the chart.