US heads manufacturing PMI rankings as Europe and China struggle 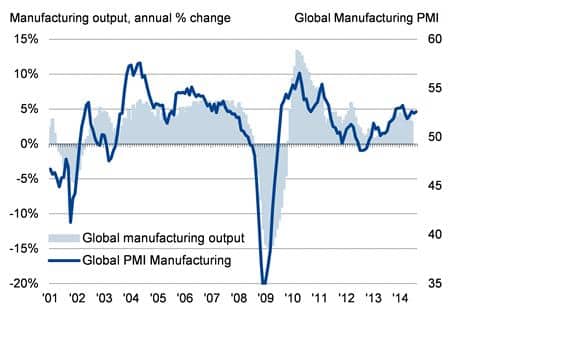 A relatively stable headline global PMI in August masked varying regional trends across the world's factories. The JPMorgan Global Manufacturing PMI", compiled by Markit, edged higher in August, up to 52.6 from 52.4 in July. The index has moved within a narrow band so far this year, signalling a steady manufacturing upturn. The survey data are broadly consistent with global manufacturing output growing at an annual rate of 4-5%.

However, a downshifting of growth in Europe during August, often linked to concerns over the crisis in Ukraine, contrasted with faster growth in the US and near-stagnation in many important emerging markets.

A weakening of manufacturing growth was seen in both the eurozone and the UK. The euro area PMI fell to its lowest since July of last year, signalling a near-stagnation of the region's goods producing sector. France saw the steepest downturn of all countries surveyed globally, Italy also saw contraction and growth slowed in Germany. In the UK, growth eased sharply to its lowest since June of last year.

Companies across northern Europe in particular reported concerns about the impact of Russian sanctions, as well as a general downturn in business confidence arising from the uncertainty to the outlook caused by the growing crisis in Ukraine. UK companies also noted the detrimental impact of the stronger currency on export orders.

The slowdown will put a question mark over the appropriateness of higher interest rates in the UK, where two Bank of England policymakers broke ranks by voting for a base rate hike in August. The weak eurozone PMI will inevitably lead to calls for the ECB to take further action in the form of quantitative easing to revive growth. 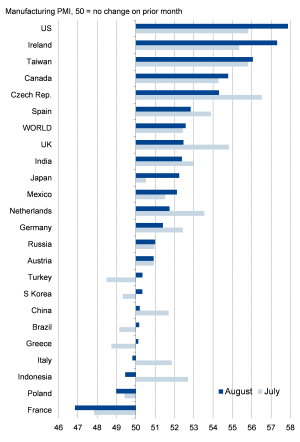 While Europe's factories struggled in August, those in the US saw business conditions improve to the greatest extent seen for over four years, reporting the fastest growth of all countries covered by Markit's PMI surveys. The US PMI rose sharply to its highest since April 2010 as firms reported stronger demand from both domestic and foreign customers. A slowing of export growth in the UK and eurozone consequently contrasted with US exports rising at the fastest rate for three years.

The US manufacturing sector has shown impressive strength since the weather-related doldrums seen at the start of the year. Such economic strength adds to the case for policymakers to start raising interest rates earlier than the current expectation of a first rate rise not taking place until the middle of next year.

There was also better news out of Japan, where the PMI continued to rebound after sliding into contraction territory in the second quarter, when the April 1st sales tax hike hit demand. The August PMI reading was the highest since March and suggests that the tax rise has merely subdued the Abenomics-fueled upturn rather than inducing a new recession. However, policymakers will no doubt want to see further gains in the pace of expansion before writing off the need for further stimulus. 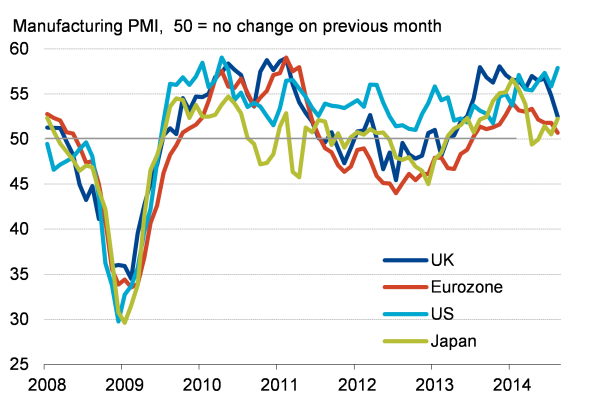 Likewise, the need for further stimulus cannot be ruled out for China, where the economy appears to be struggling despite mini-stimulus measures announced earlier in the year. The HSBC PMI (compiled by Markit) signalled almost no change in manufacturing activity in August, representing a disappointment after it had risen to a one-and-a-half year high in July.

Near-stagnation was signalled by PMIs for several other emerging markets, notably Brazil, South Korea and Indonesia, as well as Turkey. However, growth accelerated in Taiwan to the fastest for over three years, and steady growth was seen in India. Russian manufacturers reported a modest expansion for the second month running, suggesting the recent sanctions have not exacerbated the downturn that was evident earlier in the year. 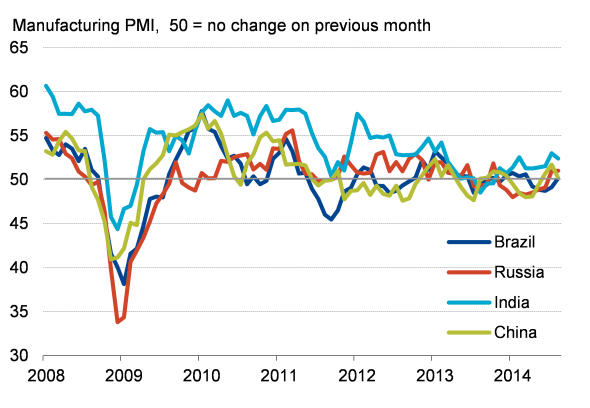