Gold ETFs have seen the largest ever inflows in the last month as investors bid up the asset class in search of a haven from recent volatility.

Gold consolidated its strong January performance last month with its best monthly surge in percentage terms in over four years. The stunning 10% plus returns delivered by the precious metal meant that gold was in fact the best performing asset class over the month as investors shunned all but the safest asset classes. In fact, the three most popular investments of the last month as gauged by ETF inflows have been precious metals, government bonds and low volatility equities. 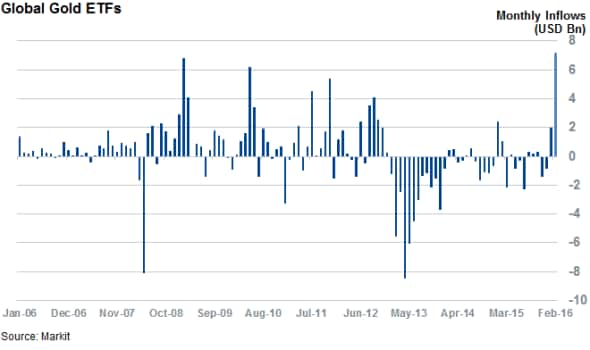 Investors seeking the asset class's shelter and its strong momentum have started a gold rush of sorts in the ETF space as investors piled into gold ETFs at a record pace over February. Global aggregate fund flows into the asset class came in at $7.9bn over the month, beating an inflow record set over the worst of the financial crisis in 2008. Inflows relative to AUM have been equally impressive as last month's tally represents around 15% of the asset managed by all gold ETFs at the start of the month making it only the third time in the last nine years that the asset class has seen inflows greater than 10% of its starting AUM.

Despite most of the headlines focusing on the totemic US listed SPDR Gold Shares ETF (GLD) and its US peers which manage the majority of all AUM of the 146 gold ETFs in the Markit ETF database, non US investors have also been eager to seek gold's safety over February. Overseas listed funds have managed to attract a third of February's record haul which adds up to $2.7bn.

North American investors remain fond of holding gold relative to the starting AUM as the $5.17bn of gold exposure bought through Americas listed ETFs represents 17% of the starting AUM. This compares to 9% for APAC listed ETFs and 13% for those trading in Europe.

Gold's appeal is also starting to spill over into the firms that mine the commodity as the Market Vector Gold Miners ETF, which is composed of 36 global gold miners and has returned 32% over February. 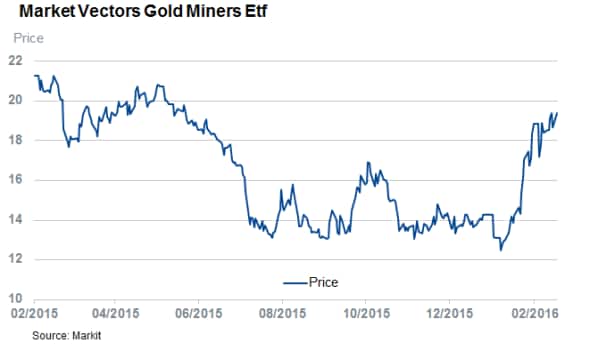 Interestingly, investors have not been as eager to gain exposure to gold miners as they have the physical commodity. In fact the Market Vector Gold Miners ETF has actually seen outflows over last month as investors withdrew $25m of funds from the fund.