Vinyl surface coatings are based primarily on vinyl acetate–based latexes used in architectural coatings, and also on solvent-based copolymers of vinyl acetate and vinyl chloride. The latexes are used mainly to make architectural (decorative) coatings. Consumption grows in line with construction activity. The North American, Western European, and Japanese construction markets are expected to remain flat during 2021–26, while the mainland Chinese market should grow at 4–5% per year. Higher rates are expected in Central and Eastern Europe, the Middle East, and other regions in Asia Pacific. Overall growth for vinyl surface coatings will be around 2.1% annually.

As of November 2021, the global industry has had to deal with the strong increase in the prices of vinyl acetate monomer caused by strong demand and extreme supply tightness resulting from the COVID-19 pandemic, inclement weather in the US Gulf Coast early in the year, and the dual-energy-control-induced production curbs in mainland China since September. In the North American architectural coatings market, there is continuing consolidation of producers, resulting in rising price pressure on all suppliers of raw materials like latexes. In addition, larger coatings producers continue to consolidate manufacturing facilities so distribution capabilities have become a more important factor. In Europe, producers must deal with REACH legislation, which is expected to curtail use of certain biocides used with vinyl acetate–ethylene emulsions. 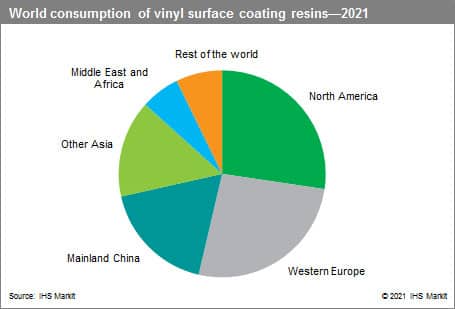 In the United States, architectural coatings grew 3–4% per year on average during 2010–17, and from 2018 to 2020, consumption rose by about 2.5 annually. However, consumption of vinyl resins was somewhat lower because of competition from acrylic resins, especially in the do-it-yourself market. Legislation in California and the northeastern United States, and the influence of the US Green Building Council’s Leadership in Energy and Environmental Design (LEED) Green Building Rating System have motivated coatings manufacturers to sell architectural coatings with very low levels of volatile organic compounds (VOCs). As a result, consumption of vinyl acetate–ethylene (VAE) emulsions, which can be formulated to produce coatings with little or no VOC, has grown strongly. However, copolymers of vinyl acetate and butyl acrylate (“vinyl acrylates”) remain the workhorses of the latex market because of their favorable performance/cost properties, which are especially valued by professional contractors for the nonresidential paint market.

In Western Europe, the construction market started growing again in 2015–19 owing to increased activities in residential and nonresidential construction sectors, but was disrupted by the pandemic in 2020. Consumption of architectural coatings is expected to grow at a rate of 1.5–2% per year for the next five years. VAEs are expected to grow faster than the overall architectural coatings market, especially in the interior drywall and masonry sectors. VAEs are well accepted in Germany and northern Europe as they meet the requirements of the Blue Angel program, which strongly encourages the use of low-VOC construction materials. Demand for other types of vinyl coatings for architecture, namely vinyl acrylics and vinyl versatates, are expected to increase at a lower rate. Demand for PVC solution and plastisol (paste) coatings will decrease. Demand for all vinyl coatings in Western Europe will increase at 1.6% per year during 2021–26.

Demand for vinyl coatings in Japan is small, as coatings are not used often in interior architectural applications, and high-durability exterior coatings (mainly acrylic copolymers with silicone or urethane) are preferred.

Overall consumption of vinyl acetate–based emulsions in mainland China is expected to continue to increase by about 3.1% annually as higher-performing water-based paints replace lesser-performing coatings. Production of coatings based on polyvinyl alcohol will likely continue to decrease because of lower performance. Paints based on polyvinyl formal will likely decline because of their propensity to release formaldehyde. Western companies have built plants to make high-quality vinyl resins and associated raw materials, such as Hexion, Wacker, and Celanese.

Overall consumption of vinyl coatings in Asia outside of Japan and mainland China is expected to increase at a rate of about 2.6% annually along with increasing demand for environmentally friendly coatings for the growing construction market. In India, vinyl acrylate coatings are expected to continue in the lowperformance distemper paints, which are used on inside surfaces that have been plastered or wallpapered.

IHS Markit’s Chemical Economics Handbook – Vinyl Surface Coatings is the comprehensive and trusted guide for anyone seeking information on this industry. This latest report details global and regional information, including