VCM production is based mainly on the ethylene feedstock route, except in mainland China, where the acetylene-based capacity dominates. In the ethylene process, EDC is produced by direct chlorination from chlorine and ethylene, and in turn cracked to produce VCM. The manufacture of VCM also results in the release of by-product hydrogen chloride, which is typically recycled to produce EDC by oxychlorination with additional ethylene. VCM is then polymerized to produce PVC. In the acetylene process, however, no EDC is involved; instead, VCM is produced directly from acetylene, which in turn is produced from coal-based calcium carbide. Mainland China is now the only region with major acetylene-based VCM/PVC facilities, but because of the scale of the Chinese vinyls industry and its large coal resources, the acetylene route still accounts for a significant portion of total global VCM/PVC production capacity. 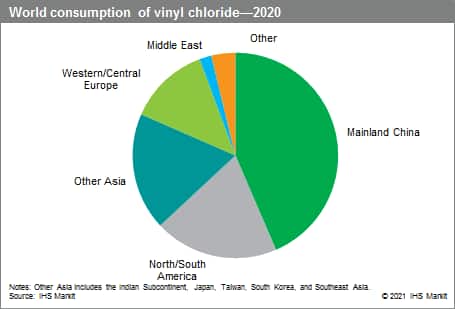 Over 99% of total global VCM consumption in 2020 was used for PVC production; VCM, therefore, follows the PVC market trend very closely. Other markets for VCM include vinylidene chloride, produced by the reaction of VCM with chlorine, and used as a comonomer in the production of vinyl chloride/vinylidene chloride copolymers. These other uses are mainly in the United States, Western Europe, and Japan.

VCM consumption is highly dependent on the PVC market, since over 99% of the world’s VCM demand is consumed for PVC production. Demand for PVC is closely aligned with the economic development growth of a country. The construction industry is a significant demand driver because PVC pipes, fittings, siding, and wire and cable are some of the basic requirements for building most infrastructure. Northeast Asia is also the largest global consumer of VCM, with mainland China driving the region, contributing 80% of regional VCM consumption and 44% total global VCM consumption in 2020. North America is the second-largest market, with 17% of global consumption; Western Europe follows as the next-largest market, with 11% of global VCM demand in 2020. Northeast Asia is anticipated to continue the trend and remain the largest regional market for VCM and PVC, led by mainland China as the primary demand driver for the foreseeable future.

The COVID-19 pandemic and the diverse government-ordered lockdowns that followed in most major economies have caused significant disruptions for many industries and markets worldwide. The current macroeconomic scenario reflects a profound recession impacting virtually every region of the world in 2020. The already-slowing construction markets were especially hard-hit, as were nonessential manufacturing sectors that were impacted by shelter-in-place mandates. The first half of 2020 was hit particularly hard by COVID-19 as it nearly brought most economic activities to a standstill. In turn, global VCM demand fell by approximately 2.1% in 2020. However, the vinyls chain is expected to show a strong recovery in demand during the forecast period.

IHS Markit’s Chemical Economics Handbook – Vinyl Chloride Monomer (VCM) is the comprehensive and trusted guide for anyone seeking information on this industry. This latest report details global and regional information, including