Sales in the primary end-use markets for vinyl acetate—paints, adhesives, textiles, and safety glass sheet for automotive and architectural applications—depend on the performance of the general economy. 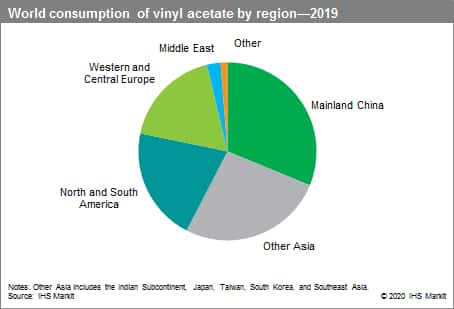 The vinyl acetate industry is an oligopoly—that is, a market with a limited number of producers, because of the high market-entry barriers of high capital costs and limited process technologies.

Globalization continues, with production capacity being added in mainland China. VAM demand is consolidating and has shifted to mainland China and other Asian markets, although the United States and Western Europe remain large mature markets.

IHS Markit’s Chemical Economics Handbook – Vinyl Acetate is the comprehensive and trusted guide for anyone seeking information on this industry. This latest report details global and regional information, including

IHS Markit’s Chemical Economics Handbook – Vinyl Acetate has been compiled using primary interviews with key suppliers and organizations, and leading representatives from the industry in combination with IHS Markit’s unparalleled access to upstream and downstream market intelligence and expert insights into industry dynamics, trade, and economics.