Urea is the most popular form of solid nitrogen fertilizer, particularly in the developing regions of the world, and is traded widely on the international market. Urea prices can fluctuate markedly and frequently, depending on crop prices, which affect demand. Around 80–85% of the production is used as a fertilizer. More than 40% of all food grown in the world is fertilized by urea. 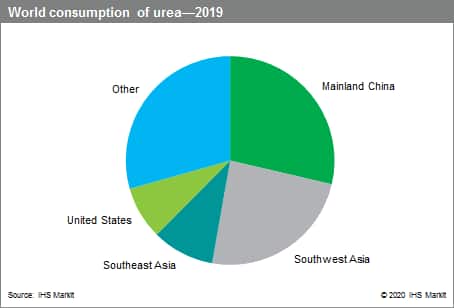 Growth in the consumption of urea is driven, in part, by the increasing global population, available disposable income, and dietary changes. In addition, although arable land has been increasing, the amount of arable land per capita has been decreasing as a result of the increases in population. As a result, more fertilizer will be needed to meet the growing need for food.

Demand originating from the nonfertilizer sector is seen to have a growing potential for urea, mostly in deNOx applications in North America, Europe, and East Asia. Use in environmental applications is significant and growing rapidly for both mobile and stationary nitrous oxide (NOx) reduction, which is being mandated by legislation. Urea is used as a diesel exhaust fluid as one of the key elements of the selective catalytic reduction (SCR) process to reduce nitrous oxides from heavy-duty diesel engines.

IHS Markit’s Chemical Economics Handbook –Urea is the comprehensive and trusted guide for anyone seeking information on this industry. This latest report details global and regional information, including

IHS Markit’s Chemical Economics Handbook –Urea has been compiled using primary interviews with key suppliers and organizations, and leading representatives from the industry in combination with IHS Markit’s unparalleled access to upstream and downstream market intelligence and expert insights into industry dynamics, trade, and economics.