Toluene is used in the manufacture of benzene, p-xylene for polyethylene terephthalate (PET) resins, and toluene diisocyanates (TDI) for polyurethane applications, and is widely used as a solvent. The majority of toluene production is unrecovered (i.e., not isolated from other aromatic constituents) and is consumed as a constituent of various refinery streams, primarily in gasoline. Additional quantities of isolated toluene are blended into unleaded gasoline for octane enhancement. This report focuses on toluene that is recovered for subsequent processing in chemical operations. 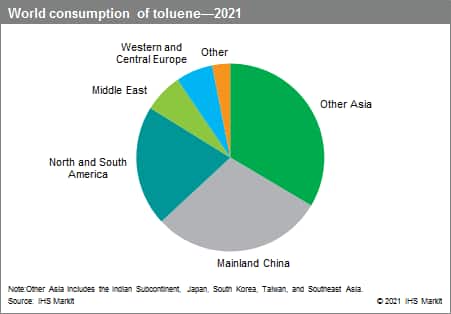 Over the next five years, good demand from the polyester sector will result in higher volumes of toluene being converted into mixed xylenes and p-xylene. Direct conversion of toluene into benzene via the hydrodealkylation process will continue to decline. Total consumption of toluene for benzene/xylenes is forecast to increase steadily over the next five years, following the start-up of facilities in Northeast Asia, Southeast Asia, and India.

IHS Markit’s Chemical Economics Handbook – Toluene is the comprehensive and trusted guide for anyone seeking information on this industry. This latest report details global and regional information, including

IHS Markit’s Chemical Economics Handbook – Toluene has been compiled using primary interviews with key suppliers and organizations, and leading representatives from the industry in combination with IHS Markit’s unparalleled access to upstream and downstream market intelligence and expert insights into industry dynamics, trade, and economics.