The paints and pigments industry continues to face substantial challenges in the Western Hemisphere as Asian, particularly mainland Chinese, producers increase the production levels of cheaper finished product. Production capacity for titanium dioxide produced by both the chloride and the sulfate route has continued to grow over the last three years. 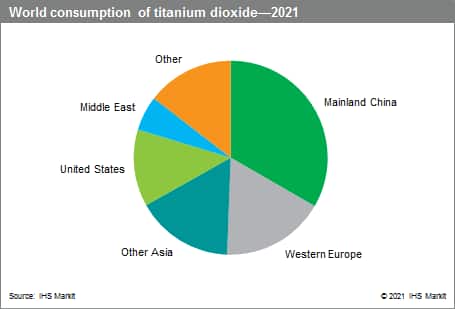 The major consuming industries for TiO2 pigments are paints and surface coatings, plastics, and paper and paperboard. Consumption tends to parallel general economic trends for these end-use applications. Ultrafine grades of titanium dioxide (particle sizes between one and 150 nanometers) are used as catalysts, UV blockers, color pigment precursors, and electroceramics. This area is growing, but is still relatively small and will not affect the overall market significantly.

North American consumption decreased slightly between 2014 and 2015, but picked up again in 2016 and 2017, mainly because of a fluctuation in coatings consumption caused by the swing in the construction and manufacturing markets. Paint and coatings continues to be the largest outlet. Western European and Japanese consumption continue to grow moderately. The real driver of growth is mainland China, where the coatings and plastics industries continue to expand at high rates. The potential remains high; per capita consumption of TiO2 in mainland China is about 1.7 kilograms per year compared with 3.0 kilograms for Western Europe and 2.7 kilograms for the United States.

Between 2017 and 2020, mainland China’s share of total world titanium dioxide consumption increased slightly to about 34%, but is forecast to decrease to 32% by 2026. An average annual growth rate of about 2.2% is forecast for Chinese TiO2 consumption over the next five years.

Poor profitability and lack of growth in Western Europe have prompted further rationalization by sulfate process–based producers, which has led to slightly higher operating rates at a slightly lower capacity level.

The TiO2 industry expects to have attractive margins for the foreseeable future. The development of new feedstock mines can take five to ten years, and new grassroots pigment plants take four to five years to complete, especially when permitting and infrastructure needs must be addressed. With demand forecast to rise by 2.8% annually, the industry needs 200,000–300,000 metric tons of new capacity every year (discounting capacity in mainland China, which generally does not make high-quality pigment).

IHS Markit’s Chemical Economics Handbook – Titanium Dioxide is the comprehensive and trusted guide for anyone seeking information on this industry. This latest report details global and regional information, including