There continues to be growing interest in olefinic thermoplastic elastomers because of their ease of processing, greater design freedom, lightweighting ability (especially in automobiles), and their ability to be recycled. The automotive industry is the largest market for olefinic thermoplastic elastomers; in 2016, it accounted for nearly 70% of the total global market. Penetration is considered high, and continued use for automotive parts and components in passenger car and truck interiors, exteriors, and under-the-hood applications is seen as promising. 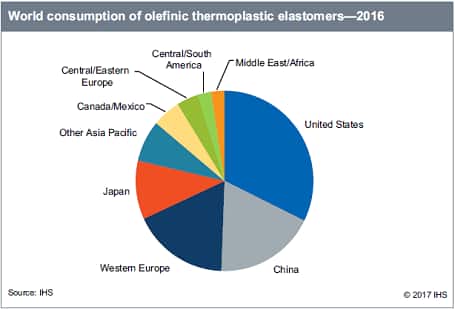 In Europe, 80-85% of the consumption of olefinic thermoplastic elastomers is tied to the automotive industry. After the declines during 2008-09 and 2012-13, automobile production experienced a strong recovery in Western Europe, as well as in Central and Eastern Europe. This resulted in a significant increase in TPO and TPV consumption in Europe during 2014-16. Growth in Central and Eastern Europe has been hampered by the recession in Russia in 2015-16 and the recession and war in Ukraine in 2014-15. This resulted in a decline in automobile production in Russia, and with that, a decline of TPO consumption in the country.