Tetrahydrofuran 4THF5 is a cyclic ether with two primary industrial uses. The major use is as a monomer in the production of polytetramethylene ether glycol 4PTMEG5, a component of cast and thermoplastic urethane elastomers, polyurethane stretch fibers 4spandex5, and high1performance copolyester1polyether elastomers 4COPE5. A smaller amount of THF is used as a solvent in polyvinyl chloride 4PVC5 cements, pharmaceuticals, and coatings; precision magnetic tape manufacture; and as a reaction solvent.

Global THF capacity, including captive use, grew during 2015-18 but is anticipated to remain at nearly the current level through 2023. The recent capacity additions took place mainly in China and Vietnam, while THF capacity in the United States and Japan declined. The two largest global THF producers are Dairen Chemical Corporation 4Chang Chun Petrochemical Group5 and BASF, combining for nearly 45% of world capacity as of December 2018. 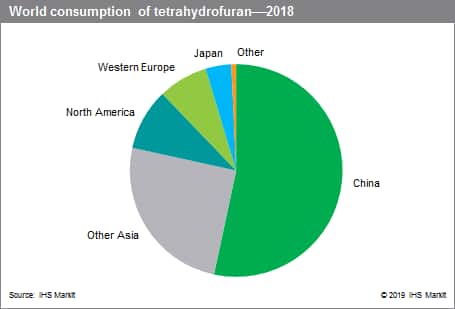 In 2018, Asia accounted for more than 80% of world THF consumption, including captive production for PTMEG, to supply the region’s rapidly growing spandex market. China is the largest market for THF, accounting for more than half of global consumption in 2018, and will continue to drive the market through the forecast period. Chinese THF production capacity has more than doubled in the last five years, such that the country became a net exporter of THF in 2016. The rapid increase in Chinese THF/PTMEG production has led to a considerable decline in THF and PTMEG exports to China, especially from Taiwan and Japan. Taiwanese exports have shifted to India, Japan, and South Korea, whereas Japan shifted to being a net importer of THF in 2015.

North America is the second-largest market for THF, led by the United States. In the United States, major producers are both back- and forward1integrated into 1,4-butanediol (BDO) and PTMEG. THF is used primarily for PTMEG production, more than half of which is consumed for polyurethane elastomers; solvent production accounted for the remainder. THF consumption in the United States is expected to grow at 2-3% on average through 2023, driven by PTMEG demand for polyurethanes and growth for solvent use of THF as a replacement for chlorinated solvents; the spandex market in the United States will continue to decline. THF consumption in Western Europe and Japan will be flat to declining through the forecast period.

The rapid increase in THF production capacity in China also led to low operating rates and falling prices in the THF market through 2016. The global operating rate has improved since then, but still remained below 60% in 2018. As consumption of THF is expected to grow at a faster pace than capacity over the forecast period, operating rates will continue to improve, approaching 70% by 2023. Overall, global THF consumption is expected to grow at an average of 3-4% annually over the forecast period, primarily driven by Chinese PTMEG production.