Concentrated or triple superphosphate (CSP, TSP) is used exclusively as a fertilizer material. TSP is a solid single-nutrient phosphate fertilizer material produced from phosphate rock and phosphoric acid. TSP typically contains 44–46% anhydrous phosphoric acid (P2O5), more than twice the P2O5 content of normal superphosphate. It is applied mainly in areas where plants are grown in soils that have a low concentration of phosphorus, which is important for root development.

The following pie charts show world consumption of normal and triple superphosphate in 2020: 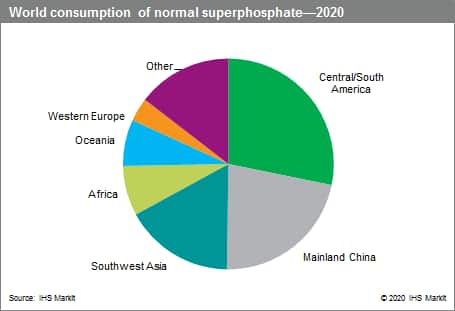 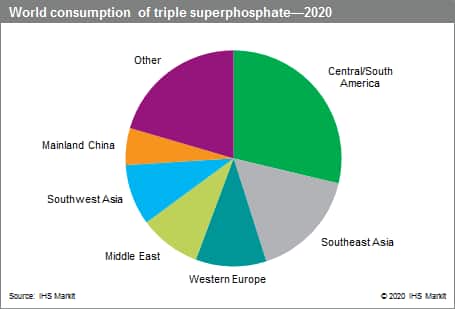 The largest consumer of NSP in 2020 is Central and South America, followed by mainland China and Southwest Asia. The world market for NSP contracted by about -2.8% per year between 2015 and 2020 and future growth will be minimal, as it continues to lose market share to higher-analysis phosphates. NSP has a relatively low nutrient analysis and generally poor physical properties; thus, its large-scale use tends to be restricted to developing regions that have phosphate rock resources that are not particularly suitable feed for the more sophisticated chemical processes involved in producing phosphoric acid and ammonium phosphate.

The largest consumer of TSP in 2020 is Central and South America, followed by Southeast Asia and Western Europe. The world market for TSP contracted by about 3.3% per year between 2015 and 2020, and future growth will be moderate (2–3% per year). TSP has also been losing market share to ammonium phosphates, which have accounted for essentially all of the growth in world phosphate fertilizer consumption for many years. Although TSP has a similar phosphate analysis to ammonium phosphates, it contains no other nutrients, while ammonium phosphates also contain a significant amount of nitrogen, the most commonly used nutrient. Thus, the transportation cost per unit of total nutrient is higher for TSP than for ammonium phosphates, but still lower than that for NSP.

IHS Markit’s Chemical Economics Handbook – Superphosphates is the comprehensive and trusted guide for anyone seeking information on this industry. This latest report details global and regional information, including