Superabsorbent polymers (SAPs) are based on polyacrylic acid that can absorb hundreds of times its weight in liquids, making the polymers useful in disposable sanitary products like diapers, feminine hygiene products, adult incontinence products, and certain industrial materials. Use in diapers predominates by far, accounting for about 70% of global consumption. Use has been growing in this application in mainland China and other developing markets where disposable incomes are rising, more women are working outside of the home, the population is growing, and commercial availability is increasing. In other regions like the United States, Western Europe, and Japan, penetration of disposable diapers is already well over 90%, so the markets are mature. However, the industry is counting on growth in the incontinence market because of aging populations, longer lifespans, and greater acceptance by consumers.

The largest producers of SAPs are Nippon Shokubai, BASF, and Evonik, which together have about 45% of global capacity. Producers in mainland China and South Korea continue to increase capacity, which has led to depressed pricing. Costs have decreased since early 2019 because of lower-priced acrylic acid feedstock, which is derived from propylene. 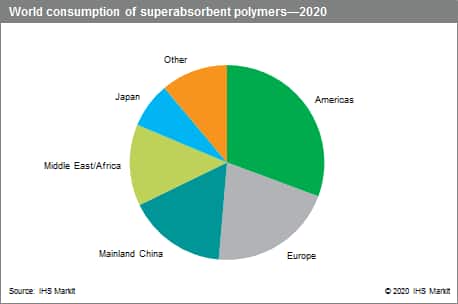 In the largest application, disposable diapers, demand continues to be strong in developing regions, but remains flat in developed countries because of market saturation and low birth rates. Good growth is expected in the developing world for several reasons:

Adult incontinence products, the second-largest use, is expected to experience much higher growth in developed regions for several reasons:

The third major use of SAPs is in feminine hygiene products. This generally has become a low growth area in the developed world, but is expected to grow faster in the developing world as their availability increases and women become more educated about these products. The industry is developing newer products that appeal to sports-minded women.

SAPs are also used in industrial applications such as agriculture, where they are used to regulate water release in soils in arid climates and adsorb excess water in damp climates. Other uses include protective coatings for electrical cable, food packaging, and medical/medical waste adsorbents.

SAP feedstock costs have been dropping because of lower acrylic acid pricing, which in turn has dropped as propylene costs have eased considerably since early 2019. The prices of SAPs have dropped as the industry faces overcapacity issues despite relatively strong global demand. In particular, South Korea and mainland China have added considerable amounts of new capacity since 2012. It will take several years for demand to balance with supply.

IHS Markit’s Chemical Economics Handbook – Superabsorbent Polymers is the comprehensive and trusted guide for anyone seeking information on this industry. This latest report details global and regional information, including

IHS Markit’s Chemical Economics Handbook – Superabsorbent Polymers has been compiled using primary interviews with key suppliers and organizations, and leading representatives from the industry in combination with IHS Markit’s unparalleled access to upstream and downstream market intelligence and expert insights into industry dynamics, trade, and economics.

Reduce The Risks Associated With Your Capital Investments