Sulfuric acid is one of the largest-volume industrial chemicals produced in the world. The production of fertilizers, especially phosphate fertilizers from wet-process phosphoric acid, is the major end-use market for sulfuric acid, accounting for over 60% of total world consumption in 2020. This share is expected to slightly decrease through 2025, mainly because metal leaching and steel pickling applications are expected to grow at a higher rate. About 14% of global sulfuric acid is consumed for about 20 chemical processes. Major growth drivers on a global level in decreasing order are use for phosphoric acid, metal leaching, ammonium sulfate, and titanium dioxide. 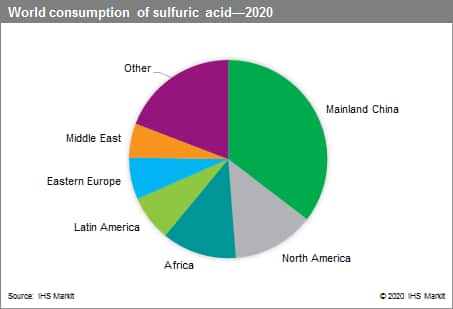 The majority of sulfuric acid is generated by burning sulfur; smelter acid is involuntarily produced and its economics are driven primarily by metal markets. Increased recovery of by-product sulfuric acid at smelters has had a significant impact on the industry, leading to increased trade in sulfuric acid (since by-product producers are not necessarily located near acid markets) and forcing some sulfur-burning plants to close. About 4% of world production enters the extraregional trade markets.

Global demand for sulfuric acid is projected to increase during the next five years. Mainland China is the major market, accounting for more than 35% of consumption in 2020, followed by North America with about 13%. Africa, Latin America, Eastern and Western Europe, and the Middle East are also large users. Fertilizer demand for sulfuric acid is forecast to increase steadily during the forecast period, while demand for chemical and industrial use is expected to grow at slightly higher rates.

IHS Markit’s Chemical Economics Handbook – Sulfuric Acid is the comprehensive and trusted guide for anyone seeking information on this industry. This latest report details global and regional information, including