Sulfur is one of the chemical industry’s most important raw materials. It is used principally as the derivative (sulfuric acid) in many chemical and industrial processes and is particularly important in the manufacture of phosphate fertilizers, the single largest end use for sulfur. Other key uses include rubber processing, cosmetics, and pharmaceutical applications. Sulfur’s importance to industrial economies and its relative ease of transportation have made it a commodity of major international interest. It is derived as a by-product from operations such as petroleum refining, tar sands recovery, heavy oil and natural gas processing, and from coking and metallurgical plants.

In the past five years, sulfur production has been affected by reduced natural gas processing, a shift in feedstock mixes from sour to slightly sweet crude, depletion of certain natural gas fields, and changes in demand from some types of fuel. However, production increased by 8%, with new plants developed in the Middle East and mainland China’s growing coal chemical industry that has developed strict environmental standards, which has led to the establishment of many sulfur recovery plants. 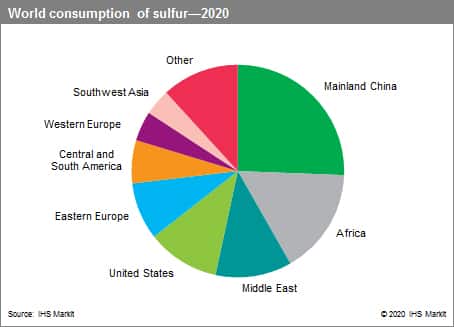 Approximately 90–95% of elemental sulfur recovered is used to produce sulfuric acid. In recent years, sulfur use is increasing as a nutrient through ammonium phosphate derivatives and NPK compounds that are blended with sulfur. Fertilizers are the ultimate use of about 50% of the world’s sulfur production. Phosphate fertilizer production accounts for about 85% of this total, but ammonium sulfate production is also significant. Thus, the sulfur market is very dependent on the cyclical global phosphate fertilizer market. Phosphate production in mainland China plays an important role in determining sulfur requirements. Africa has also gained importance as a significant global importer of sulfur and is currently the largest importer. Demand from downstream products such as sulfuric acid–based single superphosphate and potassium sulfate contributes to sulfur demand. There are no substitutes for phosphates in their role as a plant nutrient. After a recent slump, there are indications that sulfur demand is improving, given that the production of di- and monoammonium phosphate in mainland China has been increasing. A similar increase in demand is also happening in India. Although these plants are designed primarily to produce ammonium phosphates, they are often used to produce NPK fertilizers as well as sulfur as a nutrient.

Global sulfur supply is expected to continue to grow from both crude refining and natural gas processing operations. Future production will occur mostly in the Middle East, Asia, and Eastern Europe, while regions like North America, Western Europe, and Japan are likely to experience reduced production levels. Potential expansions in the UAE as well as projects in Kuwait, Qatar, Oman, Turkey, and Saudi Arabia are adding significant supplies as a result of hydrocarbon processing. Several expansions/upgrades in Eastern Europe will result in sulfur production increases. Much of the new supplies from the Middle East will satisfy demand from new upcoming phosphate production in Saudi Arabia and Morocco. This could lead to production rationalization in regions that export to the Middle East.

In the medium to long term, sulfur supply will be affected by the emergence of abundant shale gas. An increase in shale gas production could lead to a decrease in production from current sulfur sources, resulting in lower production from oil and natural gas sources. This could lead to increased prices. However, increasing extraction from poorer-quality gas and crude oil, along with oil sands production, is expected to lead to increased sulfur production, mitigating the supply situation. Additionally, with stringent standards coming into force in Asia on low-sulfur gasoline and diesel, along with IMO regulations on bunker fuel sulfur content, sulfur production may increase. Bunker fuel demand has been growing at around 3% per year for quite some time, and an increase in bunker fuel consumption with minimal sulfur content could increase sulfur availability. Total demand, however, is not expected to change. Sulfur content in bunker fuels used in seaborne vessels has been reduced to 0.5% starting in 2020, significantly lower than the earlier level of 3.5%.

Most of the growth will be in the Middle East, which is expected to become the top sulfur-producing region. Potential expansions in the UAE as well as projects in Kuwait, Qatar, Oman, Turkey, and Saudi Arabia are adding significant supplies as a result of hydrocarbon processing. Some parts of Europe will experience a decrease in production. Eastern Europe and Central Asia will continue to add supplies. Several expansions/upgrades in Russia will result in sulfur production increases. Global consumption of sulfur is forecast to grow at an average annual rate of 3.3% during 2020–25.

IHS Markit’s Chemical Economics Handbook –Sulfur is the comprehensive and trusted guide for anyone seeking information on this industry. This latest report details global and regional information, including

IHS Markit’s Chemical Economics Handbook –Sulfur has been compiled using primary interviews with key suppliers and organizations, and leading representatives from the industry in combination with IHS Markit’s unparalleled access to upstream and downstream market intelligence and expert insights into industry dynamics, trade, and economics.