Styrenic block copolymers (SBCs) belong to the thermoplastic elastomer (TPE) family of products, and have a wide range of end uses. The SBC products considered in this report include styrene-butadiene-styrene (SBS), styrene-isoprenestyrene (SIS), and HSBCs—hydrogenated SBCs.

As of mid-2017, the world market for styrenic block copolymers (SBCs) is adequately supplied. China is the world’s largest producer and consumer of SBC. The major trading nations are the United States (imports) and Taiwan (exports). The United States has significantly increased its imports from South Korea (mainly SBS), and Taiwan has increased its exports to other Asian countries, principally China. More than 80% of Taiwanese SBC production was exported in 2016.

Asphalt (bitumen) modification and footwear (both mainly use SBS) were the two largest segments in 2016. Use in asphalt modification has usually been governed by several factors, including competition from other asphalt modifiers, paving of new roads and highway construction, repair of roads and highways and resurfacing thereof, in addition to federal, state, city, and private spending of available and future funds. SBC use in footwear is generally governed by competitivematerial factors, differences in shoe types, and general country-specific shoe production volumes. 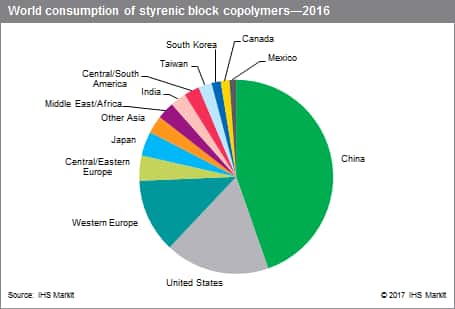 China is the largest market for styrenic block copolymers. Of the SBCs, SBS is the largest-consumed product in the Chinese market. Development of SIS and SEBS in China was relatively slow in the last few years, but will have a larger platform for future consumption, stimulated by the two-child policy and light vehicle development.

In past years, footwear consumption accounted for the largest volume of total SBC elastomer consumption in China. However, the footwear industry in China has been experiencing an adjustment because of industry movement to South and Southeast Asia as well as the rapid development of competing materials like EVA and TPU. The growth of SBC consumption in footwear has been and will continue to be slower in coming years.

Asphalt modification has become the largest market for SBC elastomers in China since 2015. This was due in part to the launch of the Ministry of Transport of the People’s Republic of China’s inspection of arterial highway maintenance management, which required that pavement-modifying materials must be used in the construction of provincial highways. In addition, the domestic infrastructure policy adoption of “One Belt, One Road” in China also promoted SBC use in asphalt modification. In the next five years, asphalt modification in China will continue to be the main driving force for total SBC consumption.

The SBC market in Europe recovered during 2013–16 in line with GDP growth; growth for SIS and hydrogenated SBC had above-average and above-GDP growth. The Western European market suffered from the world economic crises in 2008– 09, and later from the European sovereign debt crisis in 2011–14; the latter affected mainly the southern European countries including Greece, Italy, Spain, and Portugal. In the next five years (2016–21), SBC consumption in Western Europe will grow slightly above GDP, in the range of 1.5–2.5% per year through 2021.

The SBC market in Central and Eastern Europe is driven primarily by developments in Russia. The Russian SBC market grew quite well despite the recession in the country during 2015–16, and SBS production profited from higher Russian exports.

The SBC market in the Middle East and Africa parallels the Central and Eastern European market in that the market is driven by the situation of a single country, Turkey, which is by far the largest SBC market in the region. It is not clear to what extent the continued political turmoil in Turkey will influence the general economy and thus SBC consumption.

In Other Asia, excluding Japan and China, consumption of SBCs is growing and is expected to grow at around 3% per year. In this region, only Taiwan and South Korea produce SBCs; Taiwan produces SBS and SEBS and South Korea produces SBS. Both countries did not produce SIS because they did not have isoprene until mid-2014. However, one isoprene plant was started up in Taiwan in late 2014, and two plants were started up in South Korea in mid-2016. As a result, a joint venture between Lotte Chemical and Versalis started up an SIS/SBS plant in South Korea. CPC and TSRC are also considering construction of an SIS plant, but the timing has not yet been decided.

The global styrenic block copolymer market is forecast to grow at an average annual rate of 3.8% during 2016–21.