In the last decade, North America and Western Europe have shut down a significant amount of SB/SBR latex capacity following a decline in demand (especially for the coated paper and carpet industries). North American capacity has declined by close to 49% and Western Europe has lost 32% of its capacity in the last decade. The markets in Japan and Other Asia (excluding China) have been flat to declining as well during the same period. The exception is China, which has seen capacity expansion to meet demand for SB latex end-use applications. As a result of a growing middle class, improved standard of living, and adoption of global consumer brands, capacity and production quantities are currently ramping up in China. However, in the next five years, Chinese demand and capacity will grow at a much slower rate.

This report mainly covers supply/demand for styrene-butadiene latexes (SB latex and SBR latex), which are classified based on styrene content. SB latexes contain at least 45–80% styrene, and SBR latexes contain less than 45% styrene. In industry, SB latexes are most widely used for coated/pigmented paper and paperboard coatings and carpet backcoatings and accounted for a vast majority of worldwide styrene-butadiene latex consumption in 2016. The remaining consumption is for SBR latexes, which are used mostly for molded foams and adhesives. Styrene-butadiene-vinylpyridine terpolymers, which are used almost exclusively for tire cord treatments, represent a minimal portion. 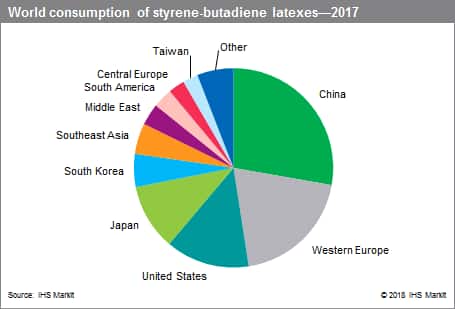 The production of SB latex is highly fragmented worldwide. More than 50 producers globally, with two market leaders— Trinseo and BASF—together control more than 25% of the market. Because of the fragmentation and low overall growth in the market, it is possible to expect a further rationalization of the supply structure, including more capacity rationalization (including unit closures).

Consumption of SB/SBR latexes is forecast to grow at about 1% per year from 2017 to 2022, in part because of the following:

In paper coatings applications, SB latex has better properties than other materials, especially for wet applications such as paper drink carriers. But in other applications SB latex has competition from butyl acrylate–based systems, and also from the increasing starch content in more conventional paper grades. Bio-based latex has shown only small penetration so far, and is not expected to have a significant impact.

The second major outlet for SB latex is in backcoatings for tufted carpets. Latex backcoatings hold the tufts in place, anchoring the pile fibers, providing improved stability and resistance to fraying or tuft loss at the cut edges of the carpets. The latex functions as the laminating adhesive for a secondary backing (primarily polypropylene), but it can also function as the actual backing on some carpets (so-called unitary back carpets). The styrene content in SB latexes varies depending on the physical features desired in the final product. Over 90% of carpets produced in the United States are tufted, and most of the carpet industry is concentrated in the southeastern states, primarily in Georgia. Accordingly, several SB latex plants are located in that region. In Western Europe, Belgium is the center of the carpet industry, followed by the Netherlands.