Styrene-butadiene elastomers (SBR) are the largest-volume synthetic rubber in the world. SBR is produced through the copolymerization of butadiene with styrene at a ratio of approximately 3:1. There are two major types of SBR—emulsion and solution. Emulsion SBR (ESBR) continues to lose ground to solution SBR (SSBR), which is better suited to meet the increasingly stringent specifications of high-performance tires. Nevertheless, emulsion SBR grades still account for the majority of total world capacity as of 2019. However, as most new SBR capacity additions are based on the solution SBR process, the share of emulsion SBR will likely decrease marginally by the end of the forecast period in 2024.

The tire industry is the dominant consumer of SBR. SBR is also used in nontire automotive applications, conveyor belts, industrial hoses, various molded and extruded rubber goods, footwear, and other consumer goods. Some grades of SBR, those that are waterproof and free from impurities, are also utilized in the cable industry. 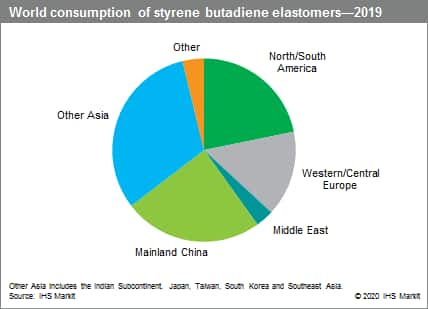 In the past five years, global consumption of emulsion SBR has been stagnant, but some regions were able to increase their share. Mainland China remains the largest consumer of emulsion SBR in 2019; however, its consumption has declined since 2014. The Indian Subcontinent has increased its consumption rapidly in the last few years. Other regions in which consumption declined between 2014 and 2019 include Western Europe, South America, and the CIS and Baltic States.

Overall, the major consuming regions in 2019 are mainland China, the United States, Southeast Asia, and the Indian Subcontinent.

Global consumption of solution SBR has increased strongly during the last five years; however, capacity increased at a slightly lower rate during the same time. By far the largest capacity additions were witnessed in Southeast Asia (Singapore and Thailand), South Korea, and mainland China. With a comparably large average annual growth rate for domestic demand in the last five years, mainland China has become the largest consumer of solution SBR, surpassing Western Europe, the United States, and Japan. Overall, the major consuming regions for solution SBR in 2019 were mainland China, Western Europe, the United States, and Japan.

Considering the large amount of SBR consumed in the manufacture of tires and other automotive products like belts, hoses, and gaskets, demand is very much dependent on the automotive industry and tire sectors as a whole. On a positive note, growing use of low–rolling resistance tires to reduce fuel consumption and decrease CO2 emissions should increase solution SBR demand. Since these performance improvements cannot be achieved with emulsion SBR, there is a trend toward the increasing use of solution SBR, which is reflected in a comparably healthy estimated average growth rate over the next five years. The most important determinant of SBR elastomer consumption is demand for tires.

Northeast Asia (mainland China, in particular) is by far the largest styrene-butadiene elastomers consuming region in the world, followed at some distance by North America, Southeast Asia, and Western Europe. By 2024, consumption in the Indian Subcontinent will surpass that in Western Europe. The three largest consuming regions are projected to account for nearly two-thirds of the total combined consumption of SBR.

IHS Markit’s Chemical Economics Handbook – Styrene-Butadiene Elastomers (SBR) is the comprehensive and trusted guide for anyone seeking information on this industry. This latest report details global and regional information, including