Crude Oil Turmoil and the Global Impact on Petrochemicals:
Navigating an uncertain course back to “normal” Comprehensive Review of implications of "V", "U" and "L"-shaped Crude Oil recovery trajectories on the Petrochemical Industry

How will you respond to different crude oil recovery trajectories?

Do you need to know the turning points & sign posts to look for as the crude oil market recovers to make better business decisions?

Crude oil prices have been very volatile and will remain so. But as these prices recover to early-2014, the recovery could happen over the short ("V" shape), medium ("U" shape), or long term ("L" shape). Each case reaches a low crude oil price that significantly changes the behavior of the petrochemical industry. Each case examines a different combination of possible oil market supply/demand situations and economic growth trajectories associated with the low crude oil price forecast and its recovery profile. Which companies will be “winners” and “losers” in each recovery situation? This study helps petrochemical companies plan for three different oil price recovery cases, discussing the associated risks and opportunities and addressing these key questions:

For each of these value chain, IHS examines the impact on the competitive economics, regional operating rates, supply, demand and trade for each of the three crude oil price recovery profiles.

Scope of Work
This study analyzes three alternative oil price cases: a V-shape, U-shape, and L-shape forecast for crude oil prices to recover to early-2014 levels. The lowest crude price used for each scenario will be calculated to represent oil/gas-based cost of production parity at the refinery/petrochemical interface – which would significantly affect the petrochemical market. While the low-price turning point will be similar in all three cases, the response of petrochemical companies will be highly dependent on how the crude oil price world evolves.

Deliverables
Clients receive an initial 2-hr presentation on the V-shape, U-shape, and L-shape oil price recovery cases addressed in the study. This high-level qualitative discussion of the implications for each case will lay out the study framework. IHS experts will present the study's findings in a 2-day (optional) workshop. All clients will receive the following deliverables:
Download Prospectus
Crude Oil Turmoil and the Global (PDF, 2 MB)

Impact on Petrochemicals: Navigating an uncertain course back to “normal”

William “Bill” Hyde directs the olefins and elastomers market advisory services for IHS Chemical. In that capacity, he is responsible for the company’s global practice covering olefins and synthetic rubber markets, including feedstock and derivatives. His primary focus has been in the areas of C4 olefins and derivatives, including the analysis of the butadiene, butylenes and synthetic rubber markets for hundreds of global clients. Prior to joining IHS Chemical (formerly CMAI) in 2002, Bill worked with Texas Petrochemicals and Union Carbide Corporation.

Bill received his bachelor’s and master’s degrees in chemical engineering from Brigham Young University in 1987 and 1990, respectively, and earned his Masters of Business Administration from Tulane University in 1994.

Mark is a Managing Director in the IHS Chemical Consulting group, and has a wide range of consulting experience covering olefin, polymer, and fertilizer markets. Prior to joining IHS Chemical in 2008, Mark worked for 33 years at Dow Chemical, where he served as the global business analyst for ethylene, propylene, butadiene, and alpha olefins and the senior business analyst for aromatic derivatives.

Mark earned a BS in Mechanical Engineering from Indiana Institute of Technology, a MA in Industrial Management from Central Michigan University, and a Certificate in Evaluation of Capital Projects from the University of Virginia.

John serves as Vice President of IHS Chemical Strategy Consulting, responsible for the sale and delivery of IHS strategy engagements globally. With more than 25 years in the chemical industry, John has extensive experience in advising senior industry executives on critical strategic issues and complex business challenges. John joined IHS in 2012 from Charles River Associates where he was a Principal in the chemicals practice. Previously, John worked in the North American chemicals strategy practice at Accenture, the supply chain services company e-Chemicals, the consultancy Arthur D. Little, and in sales and marketing at Shell Chemicals.

Don is a Vice President at IHS Chemical, responsible for the Technology and Analytics Group. Prior to joining IHS, Don worked at Nexant, ChemSystems as Senior Vice President and Director starting in 1981, where he was responsible for Nexant’s Global Energy Resources and Chemicals Business Unit. Don also has experience as a Process Design Chemical Engineer at Kvaerner (JohnBrown Constructors).

Don earned both a Bachelor’s of Science degree in Chemical Engineering and a Masters of Business Administration from the University of Connecticut.

Steve is the Senior Director, Global Olefins at IHS Chemical. During a career spanning 25 years in the refining and chemical industry, Steve has experience across the spectrum of refining and petrochemical hydrocarbon value chains covering a wide array of financial, strategic, technical, and commercial issues. Prior to IHS, Steve worked for TOTAL Petrochemicals & Refining in a variety of roles covering base chemicals and aromatics markets.

Steve earned a Bachelor’s of Science in Chemical Engineering from Michigan State University and an MBA from the University of Texas at Dallas.

Chuck is the Senior Director Global Olefins and service leader for the North American Light Olefins Market Advisory service. Chuck joined IHS (formerly CMAI) in 2006, with a focus primarily in olefins and the analysis of the propylene and propylene derivative market. Prior to IHS, Chuck worked with Total Petrochemicals USA for 21 years, working in refinery engineering/operations, purchasing, plastics logistics, and olefins commercial activities.

Chuck received a B.S. in Chemical Engineering from the University of Oklahoma and is a registered professional engineer in the state of Texas.

Joel joined IHS in March 2013 as Director of Polyolefins for North America. Prior to joining IHS, Joel managed resin procurement for Silgan Plastics, a major blow-molding plastics converter. He brings a processor’s perspective to the organization, and will take an active role in the continued development of the company’s global plastics services. Joel began his career with polyethylene manufacturer, Solvay Polymers, which later became Ineos, in technical services and then field sales.

Joel graduated from The Massachusetts Institute of Technology with a Bachelor’s of Science in Chemical Engineering and a minor in psychology.

Peter is the Senior Director of Aromatics and service leader for the North American Aromatics Market Advisory Service. He currently covers the benzene, toluene and mixed xylenes market. Peter joined IHS (formerly CMAI) as Director of Styrenics in 2006 and has covered all of the major benzene derivatives. He has over 22 years of experience in the chemical industry working first for Air Products and Chemicals and then for Sterling Chemicals. During this time he has had assignments and responsibilities ranging from process design, project start up, supply chain, product management, and sales.

Peter holds a Bachelor and Master of Science degree in Chemical Engineering from Northwestern University and an MBA from the University of Houston.

George joined IHS Chemical in 2013 and currently serves as a Director of the Chlor-Alkali group. George has more than 15 years of experience in the chemical industry. He began his professional career at Union Carbide in 1995 as a Process/Project Engineer supporting a number of plants including ethylene oxide, oxide derivatives, olefins, acrolein, acrylic acid and infrastructure. When Carbide was acquired by Dow Chemical, George served as Project Manager for polypropylene, supporting projects at the Oyster Creek and Seadrift plants.

George earned a Bachelor’s of Science in Chemical Engineering from the University of Texas at Austin and an MBA from Rice University.

Vipool joined IHS Chemical as the manager of the Scenario Program in 2014. Vipool has 30 years of chemical industry experience; the last 14 as a senior project manager at Chemical Market Resources (CMR) in Houston. At CMR, Vipool was responsible for a variety of consulting projects and industry seminars involving the commercial and economic aspects of the global petrochemical and polymer industries.

Vipool graduated from the University of South Wales with a Bachelor’s of Science degree in Chemical Engineering.

In 2010, Ed joined IHS Chemical (formerly CMAI) and is currently the Business Director – Global Technology engaged in insight products dealing with technology. Prior to IHS, Ed worked at Nexant ChemSystems from 1989 to 2010 as Director of Technology. He is highly experienced in all areas of technical assessment, including technical and economical evaluations, plant operation benchmarking, and business analysis and market evaluation. Ed has almost twenty years prior experience with John Brown Engineering as a Process and Project Manager.

Ed received his Bachelor’s of Science degree in Chemical Engineering from City College of New York in 1970.

This US subsidiary of the global industry leader – with headquarters in Japan and operations in 25 countries – compiled a list of more than 400 market opportunities before selecting 5 priorities and developing action plans to accelerate entry and increase traction in new markets. All five plans were approved by the parent company's CEO.

One of the world's largest independent energy exploration/production companies responded to a request from the Government of Mozambique by sponsoring a third-party study of requirements for developing trillions of cubic feet of natural gas as well as the value of related mega-projects for the local economy and people. The study was completed in only 30 days.

One of the world's largest chemical companies has established itself as a leader in the solar energy sector by providing materials to manufacturers of photovoltaic (PV) cells. At a time when two-thirds of other providers went out of business, this company has successfully balanced its client portfolio and expanded its business in this sector. 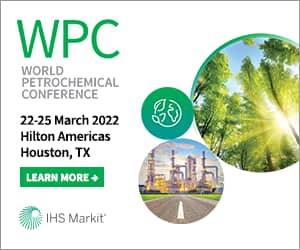 The World Petrochemical Conference is heading back (...)