Sodium sulfate can be recovered from naturally occurring brines or lakes that contain significant amounts of the product. It is also obtained as a by-product of the production of man-made fibers, chromium chemicals, hydrochloric acid, and formic acid, as well as from lead-acid battery recycling or desulfurization of flue gases. By-product sodium sulfate can have purity similar to that of the natural product. 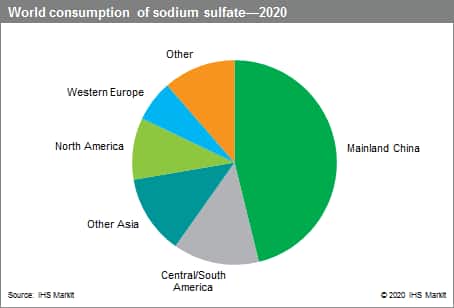 Mainland China is the world’s largest market and is growing at about 1–2% annually. It has the largest reserves of mirabilite (a major source of natural sodium sulfate) and has been building and expanding capacity to meet global demand. As production costs are relatively lower than in the rest of the world, mainland China has become the major supplier of sodium sulfate for global consumption.

Mainland China is the predominant consumer of sodium sulfate, followed by North America and Europe. Mainland China is faced with serious overcapacity, while domestic demand in the United States and Europe has been decreasing in recent years. This situation has stimulated exports from these areas. Exports from mainland China have doubled since 2004, with about half going to Other Asia and half to the rest of the world. Brazil, Colombia, Argentina, and Chile are becoming significant consumers, as are Vietnam, Indonesia, the Philippines, Thailand, and South Korea. Central and South America is almost entirely dependent on imports, with trade from mainland China and Spain accounting for about 90–95% of the total.

Historically, sodium sulfate production was mainly from natural resources in Canada and Russia, along with pockets in various parts of Latin America, the western United States, Spain, and India. However, large quantities are currently produced as a by-product from nitrate/iodine processing, rayon spinning, the Mannheim process for hydrochloric acid production, and in the manufacture of sodium dichromate, phenol, resorcinol, formic acid, boric acid, lithium carbonate, and ascorbic acid (vitamin C). In recent years, natural production has become predominant because of the increased production in mainland China.

For more detailed information, see the table of contents, shown below

IHS Markit’s Chemical Economics Handbook – Sodium Sulfate is the comprehensive and trusted guide for anyone seeking information on this industry. This latest report details global and regional information, including