Sodium chloride (salt) is one of the largest-volume inorganic raw materials used by the chemical industry. The major chemical downstream products of salt—chlorine/caustic and synthetic soda ash—are in turn used in the manufacture of many chemical products, both inorganic and organic. Large quantities of salt are also used directly for snow and ice control, as a mineral in animal diets, as a food preservative and flavoring agent, as a reagent for water softening, and in many industrial processes.

Consumption can vary significantly from one year to another, since demand in one of the largest uses, deicing, is dependent on winter conditions, mostly in the industrialized countries of the Northern Hemisphere. During the forecast period to 2024, salt consumption is expected to grow, driven by increasing demand from the chemical industry, as well as expected increasing demand from industrial, food, and feed markets. 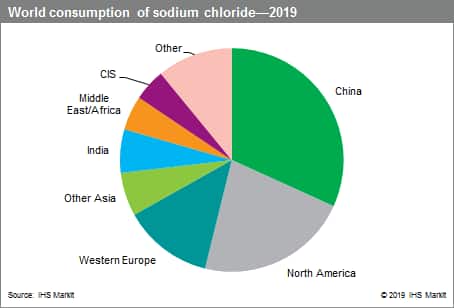 Chemical production accounts for over half of all salt use globally. The second-largest consuming segment (15% in 2019) is road salt for deicing. Consumption for deicing can vary substantially from one year to another, depending on climatic conditions. Use in food, including household (table) salt, in bakeries, and for preparation and preservation of food, accounts for about 11% of all salt consumption.

Chemical plants may consume salt in the form of brine, rock salt, solar salt, or very-high-purity grades of granulated evaporated salt as a raw material. In many instances, particularly in chlor-alkali production, the grade used can be flexible, and the feed salt is purified to the required grade prior to use. The world’s largest brine production operations are typically owned by vertically integrated chlor-alkali producers that captively produce their own salt supply as salt in brine.

Deicing relies primarily on mined rock salt with no purification required. Temperate countries with the largest rock salt production, such as Canada, Germany, and the United States, also tend to have large domestic deicing needs. In these countries, rock salt is the most inexpensive, acceptable grade of salt. It is used near its site of production; the transportation expense is minimized and thus rock salt is highly competitive in the deicing market.

Salt is available in most countries of the world, and because of its low price, producers are in most cases restricted to regional markets. However, more than 10% of all salt produced and consumed in the world is traded over large distances. The primary exporters are countries with climatic and geographical conditions that allow for reliable low-cost production of solar salt—Australia, India, and Mexico—as well as Chile with its low-cost production of open pit rock salt.

IHS Markit’s Chemical Economics Handbook - Sodium Chloride is the comprehensive and trusted guide for anyone seeking information on this industry. This latest report details global and regional information, including