Sodium chlorate is a white crystalline inorganic compound produced from salt (sodium chloride) and water in a reaction with electricity. Although not combustible, it decomposes to release oxygen, enhancing the combustion of other substances, and toxic fumes (chlorine). The largest use for sodium chlorate is for the generation of chlorine dioxide, which is used for bleaching chemical pulp. In 2018, this application represented almost 90% of total global consumption. Without China, the share of pulp bleaching in the total consumption of sodium chlorate is even higher at about 96%. China changes the global picture because of its large consumption for the production of fireworks, both through direct use or as potassium perchlorate. Other minor uses include production of potassium chlorate, sodium perchlorate, and sodium chlorite; weed control; and several other smaller applications. 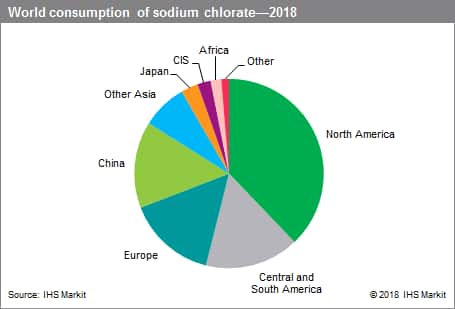 After tremendous growth during the switch from chlorine bleaching to the elemental chlorine–free (ECF) bleaching process in the 1990s and early 2000s, the global markets for sodium chlorate have matured. The overall global market is expected to continue to grow, but at slower rates than in the past. Regions with the strongest growth for sodium chlorate consumption are Asia and South America, with access to fast-growing pulp raw materials such as acacia and eucalyptus, and Russia, which has 22% of the world’s forests and low-cost electricity.

The distribution of global production capacity follows the demand from the pulp and paper industry, and accordingly is shifting toward Latin America and Southeast Asia, where pulp capacities are increasing, whereas traditional pulp producing regions—Nordic Europe and North America—are stagnant or growing slowly.

Consumption of sodium chlorate is obviously closely linked to developments in the pulp and paper sector and the overall production of and demand for pulp and paper products. Global demand for bleached pulp has been increasing, and this is expected to continue through the forecast period. Within the bleached pulp market, however, a shift is taking place. While demand from newsprint is decreasing as a result of the shift toward electronic media, demand for bleached pulp for bleached packaging paper and cartons, as well as demand for tissue pulp for hygiene products, is increasing. Sodium chlorate demand is also dependent on its preferential use in the bleaching cycle. Hydrogen peroxide, oxygen, and ozone can be used in addition to or instead of sodium chlorate in pulp bleaching, and accordingly, technological changes, as well as preferences for the economic advantages of one product over the other, will affect consumption.