Sodium bicarbonate (bicarb, baking soda) is produced primarily from natural and synthetic soda ash. It has a wide variety of uses, and animal feed, food and household applications, flue gas treatment, and pharmaceutical and chemical industry uses account for the largest part of its overall consumption. China was the world’s largest producer and consumer of sodium bicarbonate in 2019. North America is the second-largest producing region, followed by Western Europe and other Asian countries.

The leading five producers accounted for almost 47% of the installed sodium bicarbonate capacity in 2019; the majority of them operate several facilities in different regions. Solvay accounted for about 16.5% of the total, followed by Henan Zhongyuan (15.8%). Over the forecast period, capacity is expected to increase at an average annual rate of about 3%.

The following pie chart shows world consumption of sodium bicarbonate by end use: 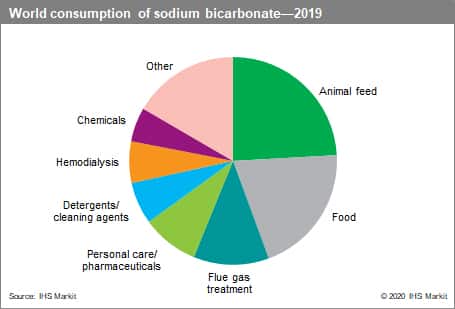 Growth in the consumption of sodium bicarbonate has slowed from the rapid rate seen during 2008–12. The reasons for this slower growth include reduced consumption in detergents with the switch to liquid formulations in North America and Western Europe, the near completion of replacement in flue gas treatment uses, and more recently, the slowdown of the Chinese economy.

The major use of sodium bicarbonate is in animal feed, accounting for roughly one-fourth of all bicarb consumption globally. Chinese sodium bicarbonate consumption for animal feed has increased significantly, in response to the rapid growth of the feed industry caused by the rapid development of the livestock sector in China. China is currently the second-largest feed producer in the world.

Demand for food applications accounted for about 20% of the global consumption of sodium bicarbonate in 2019, followed by flue gas treatment, personal care, detergents and cleaners, and hemodialysis.

Over the forecast period to 2024, world consumption is expected to continue to increase, but at a slower growth rate of about 2‒3% per year. The largest part of demand growth will be in Asian markets; accordingly, companies like Solvay and Novacap have reacted by investing in additional capacity in the region, mostly for specialty products.

IHS Markit’s Chemical Economics Handbook –Sodium Bicarbonate is the comprehensive and trusted guide for anyone seeking information on this industry. This latest report details global and regional information, including

IHS Markit’s Chemical Economics Handbook –Sodium Bicarbonate has been compiled using primary interviews with key suppliers and organizations, and leading representatives from the industry in combination with IHS Markit’s unparalleled access to upstream and downstream market intelligence and expert insights into industry dynamics, trade, and economics.