This report covers the markets for silicates and silicas. Specifically, it covers the silicates of sodium, calcium, zirconium, potassium, and magnesium, along with ethyl silicate. It also covers the specialty silicas of precipitated silica, colloidal silica, silica gel, fumed silica, and fused silica. 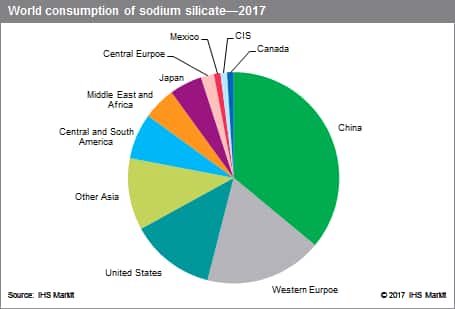 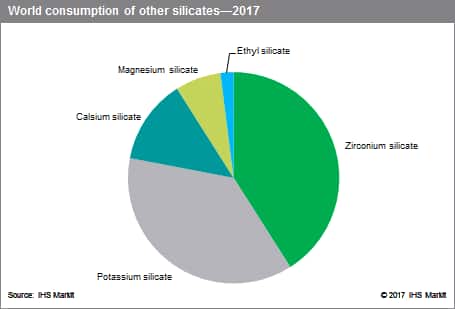 World consumption of potassium silicate is forecast to grow at an average rate of 1.5% annually during 2017–22. Other Asia is the leading consumer, accounting for nearly 42% of total world consumption, followed by Central and South America at about 21%, China at about 18%, and Western Europe at almost 10%. Potassium silicate is used as a binder in welding rods and in several other markets. It is also used as a detergent builder in both consumer and industrial and institutional (I&I) products, and in various water-based coatings for the construction industry.

World consumption of zirconium silicate is forecast to grow at 0.9% annually during 2017–22. China is the leading consuming region, accounting for almost 83% of total world demand. Zirconium silicate is used in the manufacturing of refractory materials, where resistance to corrosion by alkali materials is necessary. It is also used in ceramics, ceramic glazes, and enamels. 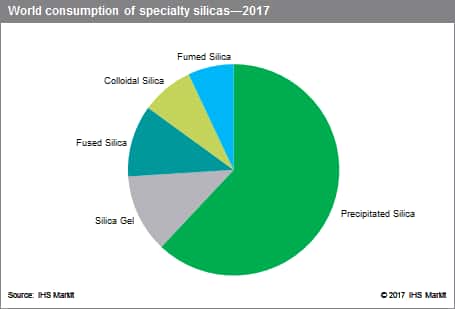 Precipitated silica is the driving force for specialty silicas and is being driven by the “green revolution” to meet environmental and legislative regulations to improve automotive fuel efficiency. It is projected to grow at almost 4% annually during 2017–22. China is the leading consuming region, followed by Other Asia and Western Europe.

Colloidal silica (silica sol), which has a much smaller particle size and a lower tendency to clump, is being adopted in chemical mechanical planarization (CMP) slurries, a reason for its accelerating growth. Its consumption is also growing in pulp and paper mills as part of a retention/drainage aid system with a polymer. Growth is forecast at about 3% annually. The leading growth market is in the electronics/semiconductor industry as a polishing agent.

Silica gel is a major driver for specialty silicas, as a result of China’s growing demand for adsorbents and desiccants. China is the largest consumer of silica gel, followed by Other Asia. Use in cosmetics and cat litter has reached maturity in developed markets. Global consumption is forecast to grow at 4% annually during 2017–22.

Fumed silica consumption is projected to grow at 2.5% annually during 2017–22, led by growth in electronic components as a result of advances in CMP, the rubber market, and new appliances, and the rebound in the production of silicones. China will be the fastest growing region at about 4.5% in the next five years. Rubber is estimated to account for 44–45% of consumption in 2017.