Propylene oxide belongs to the epoxide family of products, and is used principally in the manufacture of polyether polyols, propylene glycols, glycol ethers, and polyalkylene glycols. Overall, propylene oxide consumption is broadly tied to the general economy and has been increasingly linked to emerging countries (China, in particular), where improvements in living standards are driving an increasing use of a wide range of polymers and chemicals.

The propylene oxide industry typically builds ahead of forecast demand, which can lead to periods of market tightness or length. Since 2013, PO capacity has increased at an average rate of 3% per year, driven mainly by new developments in Asia. Meanwhile, PO consumption has grown at a stronger pace (4.2% per year on average), leading to a tightening of markets and rising average operating rates across the propylene oxide industry. In 2018, the industry-wide utilization rate was estimated at 93%, up from the 88% recorded five years ago. 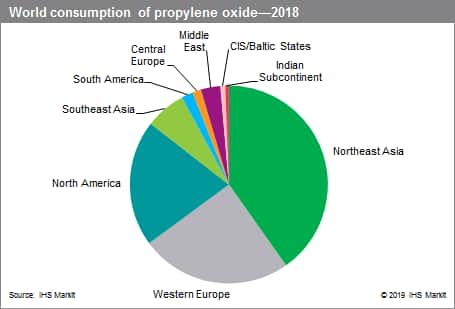 The propylene oxide producer landscape appears fairly concentrated, with the five largest shareholders accounting for 51% of the global installed capacity. Dow Inc. (formerly Dow Chemical/DowDuPont) and LyondellBasell are, by far, the two major players on the global propylene oxide scene with several assets partially or fully owned in diverse parts of the world. The next-largest producers (on a shareholding basis) have a much smaller share of the market and include Shell, Covestro, SK, BASF, Saudi Aramco, SINOPEC, and Huntsman.

There are three main routes to commercial production of propylene oxide—chlorohydrin, peroxidation (PO/SM, PO/TBA), and hydroperoxidation (HPPO and HPCU) processes. While the recent hydroperoxidation processes have gained significant momentum over the past decade, the traditional routes (chlorohydrin, peroxidation) still dominate globally. The majority of new PO production units are now designed to minimize or even avoid coproduct generation, as the marketing of coproducts has presented its own set of challenges for producers. More specifically, styrene markets had been in oversupply for quite some time, leading to limited investment into new PO/SM facilities; PO/SM investments are nevertheless now resuming as the styrene market has recovered following a decade of industry restructuring and asset rationalization.

Despite some environmental concerns in some countries (the United States, Canada, Japan), MTBE has continued to be an attractive gasoline blendstock as the global demand for octane has increased because of the growth of smaller engines and the low complexity of Chinese refineries. Nevertheless, a recent change in Chinese gasoline policy is expected to alter the MTBE market in the medium term; the country is now aiming to develop an E-10 gasoline, comprising 10% ethanol—thus requiring less MTBE. The number of new PO/TBA plants is therefore expected to gradually slow down over the next five years.

Northeast Asia is forecast to remain the major source of new propylene oxide requirements. The Indian Subcontinent will benefit from an even faster demand growth rate, albeit from a much smaller base. Northeast Asia will continue to add capacity at a sustained rate; North America, Southeast Asia, the Indian Subcontinent, and Western Europe are also expected to increase their capacity base, but to a much lesser extent. Overall, capacity additions are projected to be greater than consumption growth, leading to declining operating rates through 2023.