The Dow Chemical Company and LyondellBasell Industries are the two dominant players in the propylene glycol industry with their propylene oxide–based capacity accounting for about 29% and 15% of world capacity, respectively. Dow has plants in the United States, Western Europe, Brazil, Australia, and Thailand, and a new joint venture plant in Saudi Arabia coming onstream soon. LyondellBasell Industries has plants in the United States and Western Europe. 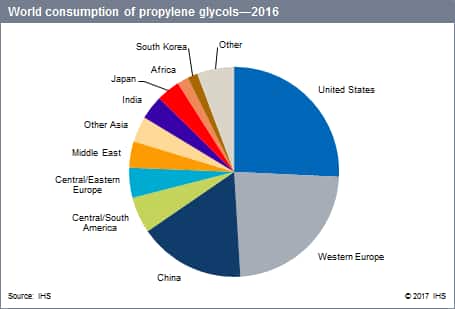 Unsaturated polyester resins are the largest end use for propylene glycol, especially in China and other developing countries. This market segment accounted for 41% of consumption in the major world regions in 2016. Demand is heavily influenced by regional construction industry trends and the overall health of local economies. Propylene glycol consumption in this market will grow at a rate of almost 3% annually over the forecast period. High growth rates will occur especially in China, Other Asia, and Central and Eastern Europe.

Other industrial uses including functional fluids, polyurethanes, paints and coatings, and miscellaneous applications have increased the consumption of propylene glycols, accounting for 30% of consumption in the major world regions in 2016. World PG consumption for this category will grow at a rate of about 2.0% annually over the forecast period. Growth will occur especially in China and other developing regions.

The antifreeze market, which includes engine coolants and deicing fluids, has increased its use of propylene glycol, although it accounts for a small percentage of the total worldwide market. In North America, although marketers have touted propylene glycol’s environmental and safety attributes, there has not been significant penetration of propylene glycol into this market. Another important application in North America and Western Europe is use as a solvent for liquid detergents.

There are huge economic influences on demand in cyclical markets; for example, consumption of propylene glycol for the production of unsaturated polyester resins dropped by 22% per year in the United States and 7% in Western Europe as a result of the declines in the construction and industrial markets during 2008–09, although production in both regions recovered to some extent during 2010–11.

The market is consolidating and shifting to China and Other Asian countries (excluding Japan). The market is at continued high risk for consolidation and rationalization, which will affect an increasing number of global players and small, older producers/production lines.

Overall, growth in the primary markets for propylene glycols—unsaturated polyester resins and a variety of industrial uses—will depend on the performance of the general economy; the forecast global average annual growth rate will be about 2.5% through 2021.