With only six major producers worldwide, the propionic acid business can be considered a global one, with trade playing a significant role in the global supply/demand pattern. Production capacity is geographically concentrated in Western Europe, the United States, and to a minor extent, in China, and is largely managed by western firms. BASF is the only western producer operating a facility in Asia via its 50% subsidiary BASF-YPC. The propionic acid business is characterized by a high level of integration and most manufacturers produce propionic acid as well as its raw materials—either ethylene or propionaldehyde, or both. Ethylene is the major factor determining the price of propionic acid and can account for up to 80% of the final production cost. 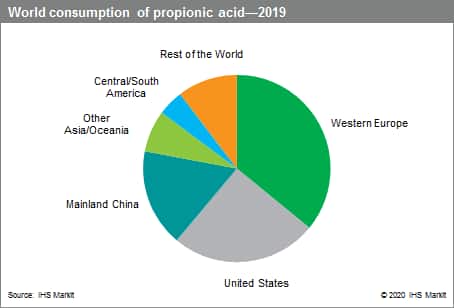 Animal feed and grain preservation account for roughly half of the propionic acid consumed worldwide. Propionic acid, or a buffered solution with ammonium salt, is added to animal feed to prevent the growth of mold (acquired as contaminants in the field or during storage). In general, usage depends on the moisture level of the feed, the storage time, and the type of livestock, with ruminants showing a higher tolerance compared with poultry and pigs.

Other significant end uses of propionic acids are in the manufacture of herbicides and diethyl ketone, while smaller-volume applications include cellulose acetate propionate, solvent esters, flavors and fragrances, and plasticizers.

The global market for propionic acid has been growing at an average annual rate of around 3% during the past three years and this is expected to continue during 2019–24. Consumption for food and feed preservatives, especially in Asia and South America, will be the major driver of this growth. In these regions, improving standards of living and the increasing popularity of processed food are supporting the use of propionate salts in food. Furthermore, increasing demand for meat in developing countries as well as the trend toward industrialized farming will also drive the use of propionic acid in feed applications. Other fast-growing markets include propionate esters for solvents, such as n-butyl and pentyl propionate; these esters are increasingly being used as replacements for solvents listed as hazardous air pollutants.

Thanks to recent capacity expansion in China and in the United States, the market is presently adequately supplied. However, capacity additions might become necessary in the future, depending on the demand development of other carboxylic acids that share the same multiproduct oxidation units with propionic acid.

IHS Markit’s Chemical Economics Handbook – Propionic Acid is the comprehensive and trusted guide for anyone seeking information on this industry. This latest report details global and regional information, including

IHS Markit’s Chemical Economics Handbook – Propionic Acid has been compiled using primary interviews with key suppliers and organizations, and leading representatives from the industry in combination with IHS Markit’s unparalleled access to upstream and downstream market intelligence and expert insights into industry dynamics, trade, and economics.