Potassium (K), which occurs both in the Earth’s crust and in its bodies of water, is the third major fertilizer nutrient, after nitrogen and phosphorus. The term potash is used to describe a wide variety of minerals and chemicals valued for their potassium content. Potassium chloride (KCl) is the most common and least expensive source of potash. Approximately 90% of total potash consumption is for fertilizer use, with the balance being consumed in a variety of industrial applications. Most of the potash-consuming countries have large agricultural bases and require imports to meet fertilizer demand. 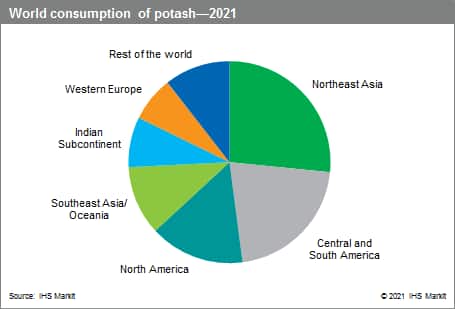 The CIS and Baltic States and North America are the major regional producers, together accounting for more than two-thirds of world production. The major potash producers are Nutrien and The Mosaic Company in Canada, Uralkali in Russia, and Belaruskali in Belarus. Potassium chloride accounts for more than 95% of world potash production; potassium sulfate compounds account for most of the remainder.

Fertilizer demand is driven by growing populations’ food requirements, as well as the switch from a carbohydrate-based regimen to a protein-rich diet. As the global population increases, the need for food and the nutrients required to produce food correspondingly increase. Demand for food directly influences potash production. Although crop prices and the timing of purchases may affect short-term demand, growth is definite in the medium to long term. The global population is expected to grow at an annual rate of slightly over 1% during the forecast period. Increased meat consumption will drive livestock production, which consumes crops like corn as feed, which in turn increases the requirement for potash. Demand will also come from the production of regulatory-driven biofuels, including ethanol and biodiesel, as there will be an increasing requirement to cultivate more corn, sugarcane, and palm crops.

Mainland China is the largest consumer of potash, followed by Brazil and the United States. With so few producing countries, much of the world is heavily dependent upon imports to satisfy potash requirements. World trade in potash is very significant, accounting for more than 80% of world production during the past five years.

The potential world potash supply and demand conditions over the next five years will be determined by the balance between the potential supply from expanding capacity and the growing demand for fertilizer use from food requirements.

IHS Markit’s Chemical Economics Handbook – Potash is the comprehensive and trusted guide for anyone seeking information on this industry. This latest report details global and regional information, including

IHS Markit’s Chemical Economics Handbook – Potash has been compiled using primary interviews with key suppliers and organizations, and leading representatives from the industry in combination with IHS Markit’s unparalleled access to upstream and downstream market intelligence and expert insights into industry dynamics, trade, and economics.