Polyvinyl chloride, more commonly known as PVC, is the third-most-widely produced synthetic polymer, after polyethylene and polypropylene. PVC is part of the vinyls chain, which also comprises EDC and VCM. PVC resin grades can be used for rigid and flexible applications; rigid is consistently the dominant consumer, but in parts the two are closer aligned. The majority of rigid PVC is used heavily in the construction industry for pipe and fittings such as drain-waste-vent (DWV) pipe, sewer, water pipe, conduit (electrical, telecommunications), and irrigation pipe. Rigid grades of PVC are also in the building and housing markets for profile applications such as doors, window frames, fencing, decking, luxury vinyl tiles. A very small volume of rigid PVC is manufactured for bottles, other nonfood packaging, and credit cards. PVC resin can be used in flexible applications by the addition of plasticizers. In this form, it is also used in wire and cable insulation, imitation leather, signage, inflatable products, roofing membranes, and many applications where it replaces rubber. This versatile advantage, along with attributes like durability, nonflammability, resistance to chemicals and oil, mechanical stability, and ease of processing and molding, indicates that PVC remains a competitive and attractive option for many applications in the construction and infrastructure, agriculture, electrical products, and healthcare industries. Hence, PVC will remain a significant thermoplastic over the long term.

Since the construction industry plays a key role in the PVC market, demand for PVC is closely aligned to global GDP growth and economic development. Stronger PVC consumption is usually more concentrated in the developing economies in Asia, such as mainland China, India, Pakistan, Vietnam, and Indonesia. The common drivers of PVC consumption for high-demand locations include a large population base with a stable political climate that still needs considerable spending on infrastructure. Another factor is the size and stage of development of the country’s agriculture sector. India, for instance requires significant systems to irrigate its farmlands, has a large, sustainable demand for PVC pipes and fittings. In general, growth rates will tend to be modest in developed economies as buildings and basic infrastructure are already established. 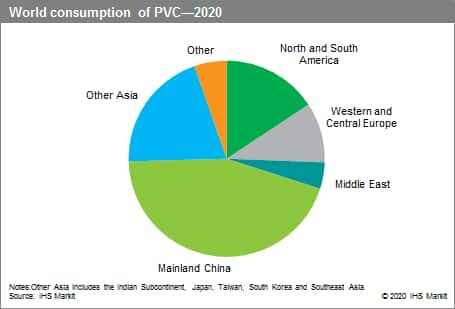 The vinyls industry is a mature sector with a long history. Technology, production volume, environmental footprint, and cost, have improved over time with upgrades in safety and product quality. Technological innovation continues to occur and is focused mainly on cost-competitiveness, since vinyl production is a truly global business, and manufacturers must be competitive both within their own regions and across the world.

PVC production is more commonly based on ethylene feedstock, with the exception of mainland China, where acetylene feedstock dominates. In the ethylene process, EDC is produced by direct chlorination from chlorine and ethylene. In a later step, it is cracked to produce VCM. The production of VCM also results in the release of by-product hydrogen chloride, which is typically recycled to produce more EDC by oxychlorination with additional ethylene. VCM is then polymerized to produce PVC. In the acetylene process, however, no EDC step is involved; instead, VCM is produced directly from acetylene. Mainland China is now the only market with major acetylene-based PVC facilities; however, because of the scale of the mainland Chinese industry, the acetylene route still accounts for a significant portion of total global PVC capacity.

IHS Markit’s Chemical Economics Handbook –Polyvinyl Chloride Resins is the comprehensive and trusted guide for anyone seeking information on this industry. This latest report details global and regional information, including