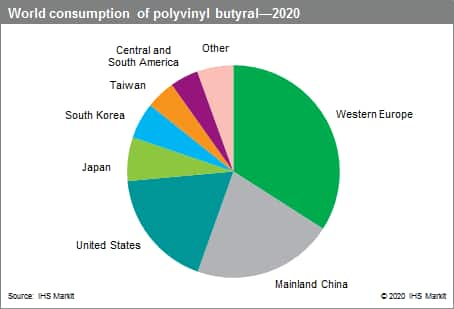 The three major multinational producers of PVB are Eastman Chemical (Solutia subsidiary), Kuraray, and Sekisui, which together account for nearly 60% of global capacity. Most of the remaining capacity is operated in mainland China by domestic firms. All producers produce film for the automotive and/or architectural markets.

Sales in the primary end markets for polyvinyl butyral depend on the performance of the general economy, especially for safety glass in the automotive and architectural markets. The polyvinyl butyral film and sheet industry will expand into markets with expanding automotive production. In the most-developed markets such as the United States, Western Europe, and Japan, but also in the Middle East, growth in demand for PVB film has been driven primarily by architectural laminated safety glass; the automotive glass market is mature in these regions.

Globally, the split of use of PVB sheet and film is about 60% automotive and 40% architectural. In Europe, the Middle East, and Africa, use in architectural applications is more important.

Other PVB applications include use in solar panels as encapsulants. The top-four film and sheet producers have developed film products for this application. However, the market is dominated by well-entrenched ethylene–vinyl acetate (EVA) films.

IHS Markit’s Chemical Economics Handbook – Polyvinyl Butyral is the comprehensive and trusted guide for anyone seeking information on this industry. This latest report details global and regional information, including

IHS Markit’s Chemical Economics Handbook – Polyvinyl Butyral has been compiled using primary interviews with key suppliers and organizations, and leading representatives from the industry in combination with IHS Markit’s unparalleled access to upstream and downstream market intelligence and expert insights into industry dynamics, trade, and economics.