Polyurethane (PU) elastomers are polymeric materials based on diisocyanates, polyols, and in some cases on chain extenders when reacted to produce synthetic materials with elastomeric properties.

Polyurethane elastomers are used in a wide variety of end-use markets including footwear (primarily as shoe soles), transportation (including tire fill products, run-flat tires, gaskets, seals, spring aids, and truck bed liners), wheels and tires, construction applications, and machinery (including agitators and parts for the mining and oil and gas markets and cast products such as bearings, belts, and pulleys). The footwear market is the largest end-use market, with approximately 36% of global consumption in 2016. In 2016, thermosets accounted for 76% of the global PU elastomer market and thermoplastic polyurethane elastomers for the remaining 24%. 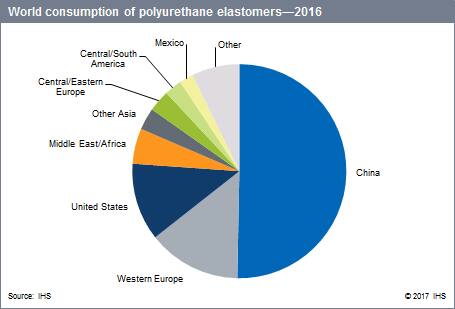 The amounts consumed for microcellular, primarily in footwear, and general TPU growth are the key driving forces for the future development of PU elastomers in China. The consumption of thermoplastic elastomers will continue to increase as a result of the gradual replacement of EVA, PVC, and other elastomer materials during shoe production. Consumption of TPU will be stimulated by increasing use in film applications. Total polyurethane elastomer consumption in China is expected to grow at an average annual rate of about 4% per year through 2021.

The polyurethane elastomer market in Europe has developed at GDP levels in the last four years, after a decline in consumption for almost a decade. Three major trends that are responsible for this development include (1) the emergence of southern European countries from their recession of 2012/2013, (2) strong growth in the automobile industry, and (3) the "reshoring" of the shoe industry, with growth in shoe production (after more than a decade of strong decline) in Western Europe as well as in Central and Eastern Europe.

North America is the third-largest consuming region/country, behind China and Europe, with 15% of global consumption. After the economic recession of 2009, US consumption grew at a moderate rate during 2010–14; however, the market has been in a slight decline in recent years. Growth in North America is forecast at an average annual rate of 2–3% during 2016–21. Growth drivers will be the expansion in most TPU markets and use for transportation (automotive light-weighting), construction (thermal breaks for multipane sealed windows), and wheel markets.