Polytetramethylene ether glycol (PTMEG) is a waxy, white solid that melts to a clear, colorless, viscous liquid near room temperature. PTMEG is produced by the catalyzed polymerization of tetrahydrofuran (THF). The chief uses of PTMEG are in the production of spandex (polyurethane) fibers, polyurethane elastomers, and copolyester-ether elastomers.

The two largest global PTMEG ̶ producers5BASF and Dairen Chemical Corporation (Chang Chun Group) ̶ together accounted for about 45% of world capacity at the end of 2018. Hyosung Corporation ranked third with almost 10%, followed by Sinopec Great Wall Energy & Chemical with 6.5%. The LYCRA Company (formerly INVISTA’s Apparel & Advanced Textiles business) was the fourth-largest producer prior to 2012 and remains a major consumer of PTMEG, but in lieu of new plants following the capacity reduction in Western Europe, the company has licensed its process technology to producers in China in exchange for long-term supply agreements.

Growth in PTMEG capacity was mild compared with the previous three years, and no additional capacities have been announced through 2023. Additions during 2016-18 were made in China and Vietnam. 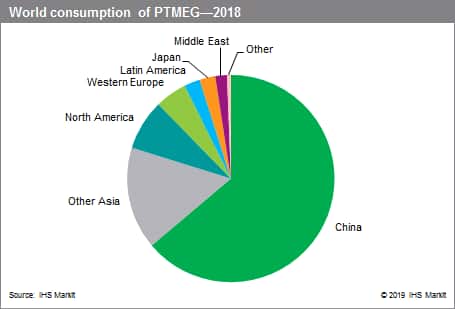 Spandex is the largest end-use application for PTMEG, accounting for nearly 80% of global demand. The generic term spandex is used in the United States while the term elastane is used in Europe. This elastomeric fiber is used mainly in apparel, including undergarments, hosiery, and athletic outfits. Spandex is also finding acceptance in nonwoven areas such as baby diapers and bandaids, as well as in home furnishing applications.

Polyurethanes are produced mainly from polyols and diisocyanates, where the polyol portion (in this case, PTMEG) forms the soft segment and the diisocyanate provides the hard segment. PTMEG is used for thermoplastic polyurethane (TPU) and cast urethane elastomers, and in urethane adhesives, sealants, and surface coatings. Products made from PTMEG- based urethane elastomers include automotive and aviation hoses and gaskets, forklift tires and wheels, roller skate wheels, industrial belts, tank and pipe liners, mining and oil production pump liners, shoes (e.g., athletic shoes), apparel such as leather coats, and medical prostheses, catheters, and other medical devices. The advantages of PTMEG-based urethanes are resistance to hydrolysis and fungus, flexibility at low temperatures, low heat buildup, high resiliency, low viscosity, and very low noise characteristics.

Copolyester-ether elastomers (COPE) are high-performance engineering materials that bridge the gap between the more flexible elastomers and the rigid plastics. COPE are relatively easy to process, resistant to oil and many chemicals, and have low-temperature-flexibility characteristics. COPE are used in many automotive applications, such as seating, airbag deployment, air intake ducts, and hoses and tubing, as well as in breathable films for medical applications.

The most widely used method of manufacturing PTMEG is based on mixing tetrahydrofuran (THF) with a fluorosulfonic acid (FSA) catalyst (HSO3F). During this reaction, the primary polymerization products formed are poly(tetramethylene ether) chains with sulfate ester groups. The sulfates are then hydrolyzed with water and the acid is removed. In the water extraction step, all water-soluble short polyether chains are also removed and the molecular weight distribution becomes narrower.

Newer PTMEG facilities use variations of the acetic anhydride process. In this type of process, the THF ring is opened by a strong acid catalyst and then reacted with acetic anhydride to form PTMEG diacetate, which is then converted to polyether glycol via alcoholysis.