PPS resins not only exhibit an exceptional combination of properties but also have an excellent cost/performance balance. They belong to a class of high-performance thermoplastics that includes specialty nylons, sulfone polymers, liquid crystal polymers, aromatic polyketones, polyetherimides, and others. Major markets for PPS resins include automotive, electrical/electronic, mechanical, and industrial, including PPS fibers and films. The automotive and electrical/electronic industries consume the most PPS worldwide. 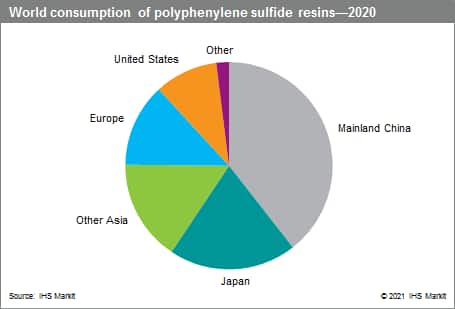 Demand for PPS resins has grown at a promising rate since the 2008–09 global recession. World automotive production is back on track, and the push for heavier loadings of PPS in automotive parts, newer applications, and environmental requirements have scaled up PPS demand significantly. Global PPS demand is expected to continue to grow at a faster pace than global GDP. During 2017–22, world PPS neat resin consumption will grow at an average annual rate of 4–5%.

Japan continues to be the largest producer of PPS neat resins. Japanese PPS manufacturers have also invested outside Japan: Kuraray increased the capacity of its joint venture in the United States in 2017, Toray started up its new plant in South Korea in 2016, and Teijin established a joint venture with SK Chemicals in South Korea. Japan is also the largest exporter, while China is the largest importer and consumer of PPS neat resins. In Asia, Japan is the second-largest consumer of PPS, after China, but its growth rate will not be high because of the shift of manufacturing industries to other Asian countries. While PPS consumption in those countries is not high, the growth rate is expected to increase rapidly.

In China, the development of PPS started early and has achieved significant progress among the different highperformance thermoplastics. In 2017, China accounted for 31% of global PPS neat resin consumption. The country will also grow the fastest in terms of consumption at an average annual rate of 6% during 2017–22. Demand for PPS resins in China relies heavily on PPS filter bag consumption. The ever-increasing number of coal-fired thermal power plants will stimulate PPS demand for filter bags, creating an immense market potential. Additionally, rapid growth in automotive production in the Chinese market will also lead to increased volumes for PPS resin consumption in the future.

In Europe, the majority of the market is in the form of PPS (glass fiber, mineral) compounds. There is also demand for PPS fibers, films, and other compounds like prepreg composites. There are several producers of PPS compounds in Europe, dominated by the neat resin producers. PPS neat resins are imported mainly from the United States and Japan.

PPS resin demand in the Middle East and Africa is small. Only Turkey has sizable consumption of PPS and PPS compounds.

New grades of PPS resins with improved mechanical and electrical properties have entered the market. They are easier to process, are lower in cost, and are available in various colors because of their greater purity. For example, PPS neat resin manufacturers now have PPS with magnetic, thermally conductive, low-wear, fiber optic, medical, and food-grade capabilities—all suitable for injection molding. Injection molding is the major processing method for PPS, but some newer grades can be blow molded or extruded. PPS resins are utilized primarily for automotive parts/components, electrical/electronic applications, mechanical/industrial applications (including for PPS fibers and film), and other uses.

PPS competes with a wide variety of materials, including metals (e.g., stainless steel, brass, aluminum, and alloys), thermoplastic polyesters (PBT and PCT), nylons, epoxies, and other high-performance thermoplastics (LCPs, polyphthalamides, and nylon 46). However, PPS’s outstanding chemical resistance distinguishes it from its competitors. Few materials can match PPS’s ability to tolerate hot, humid, and corrosive conditions. The polymer is specified for many demanding applications because of its chemical resistance, excellent heat deflection temperature, good electrical properties, light weight, and ease of fabrication relative to metals.

Consumption growth will continue to shift toward China and Other Asia, where demand in electrical/electronic, automotive, and filter bag applications is expected to rise consistently.